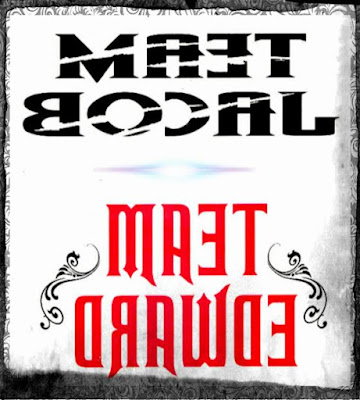 Remember Bizarro from the Superman legends? He's that guy from Htrae, instead of Earth. Htrae is a cube-shaped planet, where Earth is a sphere. The S on Bizarro's chest is backwards, and he even thinks backwards.

Well, that's the first feeling you get when you open up Stephenie Meyer's 10th anniversary edition of Twilight upside-down and backwards. The title becomes Life and Death. The apple is green, not red. The hand is a man's, because the forbidden fruit isn't Bella anymore, it's Beau Swan. 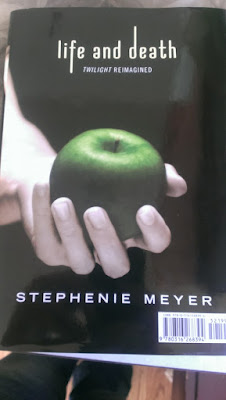 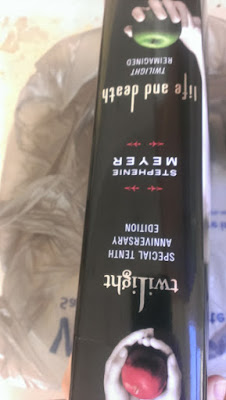 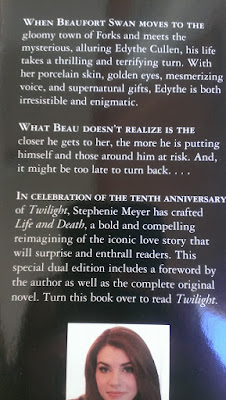 But it gets even better. Turn the page and you get to read a letter from the authoress herself, apologizing that you're not reading Midnight Sun, the much-hoped-for, unpublished volume of The Twilight Saga that tells the story from Edward's point of view. This is not that. But it's the second-best thing. I loved two things about Stephenie Meyer's foreword:

1) Her publisher contacted her with the idea in mind of having her write an exciting letter for the 10th anniversary edition of Twilight, but Stephenie thought that might be difficult. How could she make a simple letter exciting? It sounded boring to her. So...

2) She decided to answer the critics of Bella "Damsel in Distress" Swan by doing what she often suggested one could easily do: switching Bella out for a human boy, who would be just as distressed when surrounded by superhumans.

I have to confess that I have been a Twilight fan from the beginning, and I survived all the comparisons between Katniss and Bella, as if they were anything close to comparable (I think it's more honest to compare Katniss to Scarlett O'Hara, that self-preserving socialite from the Civil War era). I have pretty strong feelings about Bella's personal strength, a strength evident on every single page of The Twilight Saga.

For example, the first page of Twilight has Bella explaining how dying in place of someone she loves is a pretty good way to go. But try to figure out which someone she's talking about, and you realize she isn't saving just one person; she's saving, in her mind, at least nine. Possibly all of Forks. Everything she does is calculated to save someone else. That's not damsel-in-distress behavior. Last I checked, that's hero behavior.

Don't get me wrong, Katniss has her selfless moments, but she really has to milk them for all they're worth for the screens, doesn't she? In contrast, Bella spends every waking minute thinking about others. Now, we could argue about the psychological health of someone so martyred, so thoroughly invested in the idea of her own ordinary-ness. But her status as a hero is unquestionable. It's her mission in life. It's who she is.

First thought as I started reading: This is weird. I had to focus to keep all the names and genders straight. Okay, so this is a girl name, which means it represents a boy name from Twilight, so who had blond, straight hair and a round, cute face? Oh, right. McKayla is Mike. Got it. You may not suffer as I did if you aren't quite as OCD. In fact, I think the best way to read Life and Death is to pretend you never read Twilight. And if you never did read Twilight, you'll really love Life and Death.

Now for ten observations about Life and Death:


In closing, read Life and Death. You'll get a kick out of it, and maybe have an opportunity to analyze your own gender-based assumptions, always a good thing. In fact, I can see this being a great English class project or Gender Studies essay prompt.

I can't resist a book that gives me this much to think about.