The one week that I forget to schedule my Buffer tweets, and we get more entries than we ever have. Funny how life works, isn't it? Thanks, everyone, for writing something--tough choice this round! 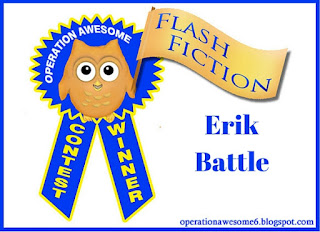 “This one’s going to be trouble,” said the Vat-Tech. She pointed with the clipboard at the tall, male form suspended by cables in the cloudy liquid.

“A bit of trouble’s good. Enough to stir up the press junkets. This one though…” She sighed heavily. She handed the clipboard to the Stylist.

“What am I looking at here? You know I don't read PCR. DNA profiling is your gig."

"This marker," the Tech pointed to a short bar on the PCR analysis. "Drug addiction."

The Stylist clicked her tongue against the top of her mouth. The Tech pointed to another blurry blob.

"And this one. Well...let's just say we'll need to watch him around the fan girls." She arched an eyebrow at her colleague to emphasize her point.

"A bit of eyeliner would really bring out the depth of his eyes," the Stylist said.

"Worse? What's worse than drugs and an overactive libido?"

"These two markers. They are the genes for depression and violence. He'll be a suicidal maniac! Destroying hotel rooms and wrecking sports cars!"

"Dear god! This is awful!" The Stylist flipped up a cover on the vat's control panel. Her hand wavered directly over a big red button. "We should flush him, shouldn't we?"

"No." The Tech calmly took the hand of the Stylist and drew it away from the button closing the panel.

"No." A satisfied smile formed on her face. "He'll be a legend.

Our next flash contest is in two weeks--tell your friends. :D
Posted by Unknown at 9:30 PM