1-Handmade paper artist sounds like an interesting profession. Do you have an image you can share to give us idea about your work in that field?

I made handmade embossed paper for thirteen years and created my own molds from clay. I made everything from small pins to wear to large framed pieces. In the beginning I sold at art shows and eventually had three sales reps who sold my work wholesale across the US and in Japan. The Japan market loved anything with the American flag on it and all my Raggedy Ann and Andy designs. I didn't keep many pieces of my work, but this one hangs in my kitchen, because I used my grandma's button collection to make the mold. 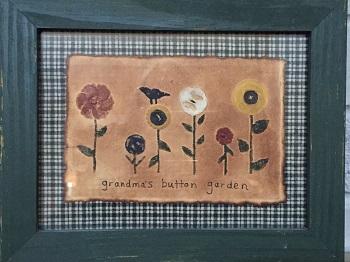 2- And a rock painter, too! How did you get into that, and might you have a picture of your best or favorite rock painted work?

After being inspired by painted stones I saw online, I started with mandalas, turtles, and dragonflies. Then I got the idea to glue charms depicting the tokens and omens in my book to stones and paint around them. You can see those on my website - http://jeribaird.com 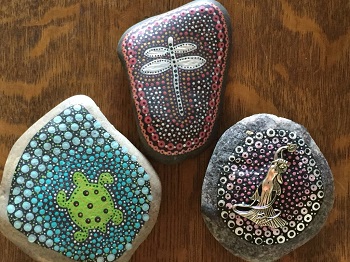 3- How much research did you need to do to write "Tokens and Omens"?

Initially, I did a lot of research on the medieval era - I've never liked history, so it was all new! Then I moved from a medieval setting to more of a tribal setting. I enjoyed learning how different cultures look at fate and the role it plays in their lives. In TOKENS AND OMENS, Moira (Fate) is a character that directly and indirectly influences the lives of the teens in Puck's Gulch.

4- What most contributed to your choice of publication method?

I'd queried a few agents and participated in twitter pitches. When Jolly Fish Press held their own twitter pitch, I submitted and received a request from two of their editors. Reece Hanzon asked for the full and then offered publication. I researched the press and emailed with one of their authors before accepting.

5- Which film (or films) were you a zombie in and how did that happen?

My first and last experience as a film extra was disastrous (for me!). I was scheduled from 2pm - 5am in an indie film called I Am Alone. It was shooting in my town, and I thought it would make a great author story (someday - no contract at the time). I drove to Cerro Summit where the crew picked us up and drove us up into the mountain. I went through make-up and a zombie class. Being newly moved to Colorado, I knew no one there, but had some nice conversations with the other extras. There was a beautiful cabin, but we weren't allowed inside. It was a bonfire and porta-potties for the lowly extras. At 8pm I was part of a group sent to stand in waist-high grass for two hours while they shot around six, five-minute scenes - same scene over and over. Then it was midnight before they used us again. Unfortunately, at 11pm I started getting a migraine. I took ibuprofen and tried to rest in a lawn chair without any relief. Did I mention that it gets bone-chilling cold in the mountains at night, even in August? But when the call came, I thought I could do it. Three scenes in and I started puking from the migraine. I ran off, puking as I went, with the security guys running after me. Yeah, that was fun! Luckily, at 2am, they decided they didn't need all of us for the rest of the shots, so five of us got to leave and they drove us down to our cars. I was just happy not to puke on the twenty minute drive home. I could have signed up for more days, but was embarrassed someone would remember me as the one who puked. The movie came to our local drive-in last summer. I didn't see me, but my name was in the credits - woo hoo!

6- Any good recipes for brains? I'm kidding! Do you have a favorite recipe you could share (or a link to one)?

In the book, Alexa makes sugar biscuits for the shack kids. This is a recipe I used when I did an author visit with a class of boys. They really liked them! http://thepioneerwoman.com/cooking/sugar-biscuits/

7- Are there any diverse characters in your book?

I have five tribes representing different ethnicities. One of the minor characters, who becomes a major character in the second book, is gay.

8- I saw a mention of the Street team members for a TOKENS AND OMENS. Are you still looking for people? Have you had a good response to this brilliant idea?

Thank you! I have 36 people in 26 states setting out painted stones on July 23-24. Unfortunately, I can't take on any more. I'm still painting stones for my tour. My husband and I are going on a 5 State, 2 Wheels, 100 Stone book tour July 19-25. By motorcycle, we're riding through Colorado, Wyoming, Montana, Idaho, and Utah leaving stones and stopping at indie bookstores and libraries. I'll post the adventure on twitter (@jeribaird11) and facebook (https://www.facebook.com/jeribaird11) if you want to follow along.

9- In a wonderful world filled with so many books, how do you select which you'll buy yourself next?

I read several writing/reading blogs, such as Operation Awesome, and often find books there. I also have a favorite indie bookstore, Out West Books in Grand Junction, where I find books that are wonderful but might not be getting lots of publicity yet.

10- Anything else you would care to share about your book and yourself?

There's also a trailer that a HS class made for the book on my account.

Here's a blurb:
Zander trusts Fate. Alexa only trusts herself. When Fate intervenes, they find they're both wrong. Now, Fate’s given them each a special gift - Zander sees secrets he doesn’t want, and Alexa's thrilled to find she can control events through her embroidery scenes. In Puck's Gulch, sixteen-year-olds undergo a dangerous trial known as the Quest. During a time of magic, Fate hands out tokens and omens based on their behavior. The teens survive the quest only by earning the tokens that will counteract the potentially lethal omens. After Zander and Alexa each earn a black panther omen that makes surviving the quest nearly impossible, they must break the rules and challenge Fate together. If they don't, one will die. Fate has made it clear – she won't be cheated.