Some very nice entries this week. Thank you to those who entered! 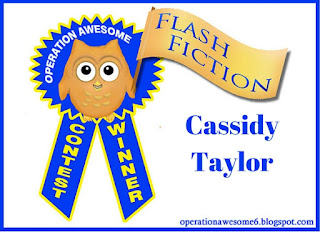 If my etchings on the wall are accurate, today is her birthday. It's hard to tell how much time has passed in space, when days can't be measured by a rising sun and time isn't told by the cycles of a moon.

My world has shrunken to this tin box, while out there somewhere, in one of the millions of known galaxies, the Mariner floats on. She floats on. Does she think of me still? When she gets out of the shower and rubs a circle in the condensation on the mirror, does she look at herself and remember when I told her that her eyes were the color of the stars? When she sees someone walking away from her in the corridor with my black hair, does she think, for just a minute, that it's me?

“He'll kill you,” she warned me, her arms around my waist, her head against my chest. We had broken into the observation tower. I want to see the stars, she had said. I want to know we're not alone. I was nothing if not obliging. Her birthday party raged on in the bowels of the ship. It seemed like the whole population had come to celebrate her, though that was impossible. The Mariner was the size of an old Earth city. The population was dense, packed into every corner. There was one ruler, and he had one princess - this girl standing in the arms of a lowly mechanic.

“I'm not afraid,” I said. I should have been. Just not of her father.

For 325 days, I was happier than I had ever been. I had learned to cherish the feeling of her hand in mine, the stolen glances across crowded halls, the embraces in hidden alcoves. Then one morning, in my small bunk, she sat with her back to me on the cot, yelling into her Comm: You can't do this! You can't take everything away from me!

“My father,” she had said. “Empty threats.” I kissed away the tears in her eyes.

Five days later, I was repairing a Scouter and looked up to find her standing in the bay. I smiled to see her there, raven-haired and red-lipped, but then the door slid into place between us, and I noticed her hand on the external controls, the hardness in her eyes. I put my hand to the glass separating us and she raised hers.

And then the Scouter had engaged, the airlock opened, and I was gone, flung into space, her hand sweating against the porthole the last piece of another human being I would ever see.

35 days drifting in space in a broken Scouter, still stocked from its last mission. 35 days for her to make it up to her father. She had proven herself to him, and today, on her eighteenth birthday, the galaxy would become hers.

Space and hope and a little bit of a Romeo and Juliet thing going on. Daw.

Our next contest is in three weeks--the second Friday of the month. But come back next week for #PassOrPages!
Posted by Unknown at 9:30 PM