1- Your Twitter profile mentions that you write for iZombie. I love that show! How did you get into that and do you have any intriguing stories related to that?

I do write for iZombie! I’m so glad you love it. I got the gig with the help of my TV agents, who submitted my writing samples to the show’s creators. They were starting the second season of the series and there were openings on the writing staff. In all sincerity, it is a dream job and I’m very grateful to be a part of the show. We just started season three a few weeks ago, and it’s going to be a game changer. One of the best parts of breaking an episode is picking what brain Liv will be on that week. I’m ashamed to admit that I probably had the most expertise when we broke Real Housewife of Seattle Brain, because I’m kind of a Bravo TV junkie.


2- The image of this tweet caught my eye. What made you most want to move the Peter Pan story from London to NYC's Upper East Side?

I LOVE that image. For anyone who’s launching a book or designing a website, I highly recommend getting in touch with Kari Luna at For the Curious Ones. They designed my website (http://sarsaediwriter.com ) and all the promo materials for the book. When I first started writing the book, I did think of it as Peter Pan meets Gossip Girl, so New York seemed like the perfect setting. Sadly, I’ve never been to London, so New York was a more familiar city to write about.

3- Why set (part of) the book in NYC instead of your hometown of LA?

I lived in New York for three years right after college and the city holds a special place in my heart. Plus, I wanted to write about teenagers who did have a certain degree of independence and freedom in their lives, and I think that’s truer of teens that live in New York. Los Angeles is much more sprawling and suburban, and I wanted more of a metropolis feel. It also felt like the claustrophobia and close quarters of New York would be a sharper contrast to life on Minor Island.

There are so many! And it feels like the city changes so much every time I go back to visit. I lived in the east village, so I love roaming around that neighborhood and strolling through Tompkins Square Park and Alphabet City. All of my old haunts. But I never go to New York without taking the train into Williamsburg for juicy pork buns at M Shanghai Bistro.

Anyone who can resist pizza crust is a much stronger person than I am. I’ll go with floppy foldable when you buy a slice out, but thin crust when I’m ordering at home.

6- Is there any diversity we can look forward to in your book?

Yes! I wanted Minor Island to be a diverse setting. I’m Middle Eastern, and when I was a teenager I had close friends of all races. That hasn’t changed in adulthood. It doesn’t seem realistic anymore to read a book or watch a TV show with all white characters or actors. I find it jarring. The book and the sequel both have African-American characters, gay characters, Middle Eastern characters, Asian characters, and those who are native to Minor Island. If I were lucky enough to adapt the book into a TV show or movie, I would hope all races would be considered for all the roles.

7- Being from Iran, might you one day set a book there or have a character from there?

Yup! There’s a character named Maz in Never Ever who’s named after my nephew and is half-Iranian. I also have a YA memoir coming out in the fall of 2017 from Knopf about growing up in the United States as an illegal immigrant from Iran. A lot of the words in the book that are native to Minor Island (like parvaz which is the flower that can make you fly) are actually Farsi words.

8- What most contributed to your choice of publication method?

I would have considered every method, but my book agent and I wanted to go the traditional route, and then explore other possibilities if it didn’t sell to the first round of buyers. It’s really inspiring that we live in a time that you can publish a book on your own, and that writers don’t need to rely on publishers to get their work out there. But since this is my debut novel, and I’m still learning about the world of publishing, I was excited at the prospect of a wider reach and learning the ins and outs of the industry from a place like Viking Children’s Books. I absolutely loved working with my editor and everyone else there. It can be a much more supportive and encouraging space than TV and film.

9- Which is your favorite statement necklace?

Ha! Probably the one I’m wearing in the photo on my website, because it was a gift from my sister. I also had this favorite chunky orange necklace I got for super cheap at Forever 21, but it sadly fell apart after a few years. I’m also a big fan of statement scarves. 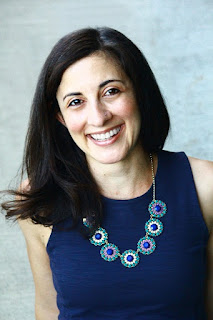 10- What's the biggest deciding factor when selecting what book you'll buy next?

I’m in a book club, and every month we take turns picking a book. Usually the group is given a few options and we all vote. So I’m usually reading the current book club selection. Like most people, I prefer a compelling story with root for characters. A little humor also goes a long way. This month, I got to choose the book. We’d read a couple very long and dense titles, so we wanted something that was more of a beach read. We went with The Rosie Project by Graeme Simsion.


11- Anything else you would care to share about your book and yourself?

Yes, I would love it if readers followed me on Twitter @saaaranotsarah and dropped me a line at Sara@sarasaediwriter.com.
I will share that one of my favorite characters to write for in the book was Tinka. It was a lot of fun to come up with an edgier, volatile, more bad*$$ version of Tinkerbell. Also, Tinka was the name of my best friend’s mom in high school!

Thank you, Sara. It was exciting to interview you.
Give my fandom-love to Rahul Kohli!

#TeamRavioli
Posted by J Lenni Dorner at 12:00 AM

Get all the best spirits and wines on Duty Free Depot!

All the popular brand name drinks for unbelievable discounted prices.