Show don't tell is a mantra among writers. While the phrase is often said, it is seldom understood.

The reader wants to feel what the character is feeling. When we "tell," the reader may know what the character feels, but they don't feel it with her. We want to invite readers into the story, not as observers, but as participants. Telling creates narrative distance, while showing places the reader in the protagonist's shoes. 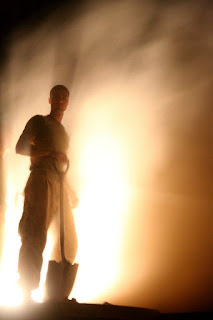 One easy way to tell if you're telling rather than showing is if you name a feeling.

The cast walked onto the stage and bowed as Angela clapped with excitement.

Clarence dug his shovel into the earth, exhaustion weighing him down.

In both cases, the feeling is named--excitement and exhaustion. We shouldn't have to tell the reader Angela is excited if she jumps out of her seat and claps and whistles. We know by the context that Angela is excited. In the same way, we can know Clarence is exhausted by the way he wipes the sweat off the back of his neck and how his muscles shake every time he plunges the shovel into the dirt. With that information, we know Clarence is exhausted because we experience the fatigue with him.

Go through your manuscript and find places where you've named the feeling and work toward eliminating those tells by showing the reader what your character is feeling.

Melinda Marshall Friesen writes YA and adult speculative fiction. When she's not writing, she's marketing books for Rebelight Publishing.
Posted by Unknown at 7:00 AM