If I SPEAK, Will You Listen? 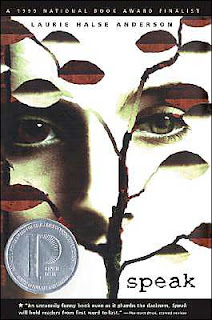 "Melinda Sordino busted an end-of-summer party by calling the cops. Now her old friends won’t talk to her, and people she doesn’t even know hate her from a distance. The safest place to be is alone, inside her own head. But even that’s not safe. Because there’s something she’s trying not to think about, something about the night of the party that, if she let it in, would blow her carefully constructed disguise to smithereens. And then she would have to speak the truth." (From Laurie Halse Anderson's blog)
I'm sure most of you will have heard about the guy who wants to ban Laurie Halse Anderson's SPEAK.
Why? Because he calls it filthy and immoral. He also goes on to call the two rape scenes "soft pornography."
Read Laurie Halse Anderson's original post here
There have been some amazing posts around the blogosphere pledging their support for Speak. Posts which are heartbreaking and honest, hopeful, rallying...posts that make me glad to be part of such a wonderful community with their generosity.
While I believe in free speech, I don't agree with other people's views on books being formed by one opinion. This got me thinking about a line from the book itself:


"We want to hear what you have to say." (Speak, Pg.148)
For Melinda Sordino this lie is told to students in high school. For me, it's a lie told to all of us. Some people don't want to hear what you have to say -- they only want to hear themselves. ﻿Rape is not, and will never be, a subject which needs to be silenced. We should never shush the voices which need to be heard, the cries of those screaming inside their own thoughts.
Speak has helped thousands of people by opening up a dialogue to the painful aspects of their past (and not just rape, but other aspects like self-harm and depression.). Speak will continue to open the gates for debate. Open young adults eyes to the dangers out there. To help them SPEAK!
Posted by Lindsay at 1:00 AM