I Love Harry Potter Because.... 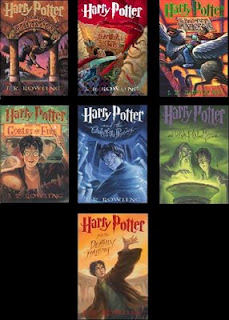 People spend a lot of time on blogs trying to come up with something clever. With something inspiring. We all try to post something that will help our fellow writers and hopefully make them want to come back. The same thing goes with our job as writers. We want to write something that changes the world; or at least, write something that people will love, such as J. K. Rowling did when she wrote Harry Potter. And one of the ways we learn to be a more compelling writer is by studying what other succesful writers have done.

The Harry Potter series is probably not my favorite set of books, but like so many others, I went to Borders on midnight when the last one came out. So what brings a book/series to the point of that kind of devotion? For me, I loved  Harry Potter because of the likable characters, witty writing, and the amazing world she created. She invented a virtual buffet of imagination for my mind.

Now that you know my thoughts, I'd like to open it up to you. I'd love to hear YOUR thoughts and YOUR opinions by responding about the Harry Potter books, more than the movies (though I've enjoyed those as well). Instead of just hearing from one person, I believe we can learn a lot more from the collective opinion of many.

I love Harry Potter because...

Posted by Kristal Shaff at 1:17 PM