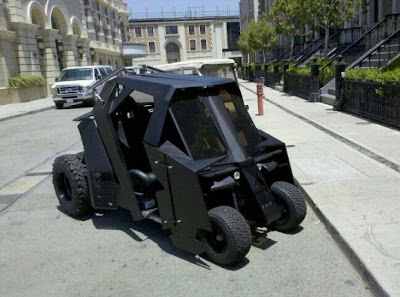 BUT I WANT ONE.

Second confession: I reached 50k on my WIP a few days ago. While skimming through my 50k first draft, I realized two things. 1) It is in the Major League of OMG Suckage; 2) It is in said League because it has what I like to call the Batmobile Golf Cart Issue.

--a first draft that consists of a bunch of stuff you want to include in a first draft, but ultimately, you sure as hell don't need.

All my first drafts have the BGCI. Usually, I think Main Character should make This Decision. I also think Villain should take down Main Character using This Punk Move. I also also think Main Character and Love Interest should Make Out during This Scene where All The Giraffes Are Eating Bananas (disclaimer: there are no giraffes in my WIP, and I'm not entirely confident giraffes eat bananas at all). The thing is, when I come back to the WIP after some distance, I notice the level of suckage for what it truly is.

Folks, I can't have the Batmobile Golf Cart. It hurts, but it's the truth.

Now if you'll excuse me, I must continue filling my first draft with Things It Doesn't Need But Will Disappear During Revisions.

Your turn: do your first drafts have the BGCI? If so, what's your most common offense?