There are so many fantastic books coming out this month!

This week, our beloved Michelle McLean is releasing book one from her Blood Blade Sisters trilogy, A Bandit's Stolen Heart. Let me just say.. I love this book! I grew up with Little House on the Prairie and Bonanza and John Wayne classics... but I'll bet it's been THAT long since I've read a real western. So once again, Michelle has re-opened a new genre for me! (historical romance being the first). A Bandit's Stolen Heart is hot and dusty, and ruggedly romantic, with western slang that was downright side-splittin'. I adore Leo and Cilla and hated to see their part of the trilogy come to an end. But knowing Michelle, the other sisters will have steamy stories of their own. LOVED IT! When was the last time you read a western? 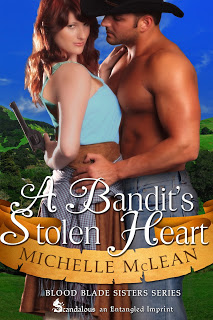 Under the persona of the bandit Blood Blade, Cilla Richardson robs from the corrupt and gives to the poor. When an accidental kidnapping leaves her with a handsome captive named Leo Forrester, Cilla finds she has the perfect ally at her side to aid in the fight against the town’s corrupt sheriff.

Leo reluctantly agrees to help by marrying Cilla’s older sister but the more time he spends with Cilla, the more determined Leo is to steal her stubborn bandit’s heart. However, Cilla is just as determined to keep her heart to herself. Then innocent people are murdered, and the sheriff blames Blood Blade. With their allies now their enemies, Leo and Cilla must convince the town of her innocence before she ends up on the wrong end of a hangman’s noose.

The second book I want to share is Aire by Lena Goldfinch.

I love everything about Aire. The characters are incredibly well thought out (Jovanni is my favorite—but I do seem to have a soft spot for falcons:-)), and the attention to detail is simply amazing. Shifting points of view add so many twists and turns, and every thread of information intertwines seamlessly. The setting is beautiful, the voice is fabulous, the pacing is perfect, and it's just... WOW! Well done, Lena! It's a lovely romance—safe to recommend for any age. 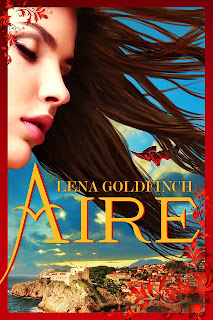 A tale of Legends reborn, of royal intrigue, and an unforgettable, heart-melting romance that will sweep you away.

Annalisia is a seer, a princess with a courageous spirit—and a soft spot for Legends.

Jovanni is a Legend, a commoner with no patience for pampered royals.

Principessa Annalisia is stunned and conscience-stricken when an unknown enemy mistakenly abducts her maidservant. Determined to find the girl, Annalisia disguises herself as plain Anna and slips away from the palace. She tracks down Jovanni, her maidservant's daring older brother, they soon begin to search together. As they uncover clues, Anna also discovers a kindred spirit in Jovanni. But would he be so free with her if he knew who she really was? Doubtful. Even so, she reveals her secret gift of visions to him, and in so doing disobeys the orders of her beloved grandmother, the queen.

With Jovanni, Anna can almost imagine she’s like any other seventeen year old girl, free to pursue the longings of her heart. When she learns that he also has a secret—he's a sentinel, an ancient shapeshifter who can take the form of a falcon—it seems as if they were destined to be together, as in the legends of il Sentiro. Though Anna is tempted to wish otherwise, she can’t forget that she’s a princess and it's her duty to marry another. Meanwhile, their hunt leads Anna ever closer to danger, for she is herself is being hunted.

A princess and a commoner.

They never should have fallen in love...but they did.

Aire is a lush, romantic fantasy, inspired by ancient Italy and Turkey.

You can find Lena at her blog, and Aire is available now at Amazon.com
Also, Lena has a contest for a free paperback version of Aire running at goodreads!
Posted by Toni Kerr at 3:24 AM