Ordinary, at a Different Angle 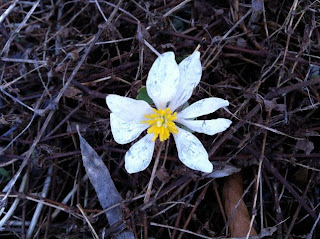 Yesterday I was out walking, mostly looking at the sky and trees (I'm always looking for arborglyphs and other unusual tree forms). I almost stepped on this wildflower growing in the dried weeds in a ditch along the train tracks. I'm glad I did not. It's bloodroot, Sanguinaria canadensis, a native plant I've only seen in identification guidebooks and never in person. It blooms for a very short time -- easy to miss temporally, even when you're in the right spot -- but I didn't expect to find it such a lowly, overlooked location. 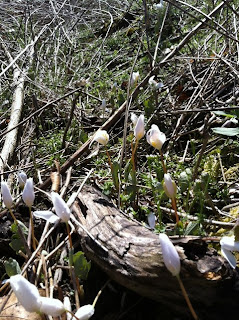 In my writing, I've tried to make those same discoveries. I hope to write about ordinary things that no one has seen because they haven't looked at the right angle.

When I was a young writer, fresh from a creative writing program, many of the breakthrough books were from writers with extraordinary backgrounds. Not just memoirs but fiction as well seemed inspired by writers' lives much more unusual than my own humble, relatively drama-free, resolutely domestic life. So how could I write what I know? What I knew was just so small. No one would want to read it.

And so I didn't write it.

Opening up to fantasy and magical realism helped me. It's not just what I know, but what I imagine, and I write it on a small scale -- the magic of homely objects. That bloodroot growing in a ditch in railway ditch is magical and transcendent on its own, but in fiction, it could be more, perhaps the  trace of a murder along those train tracks years ago.

I'll see where it takes me. And I'll remember to look at the ground right at my feet, and not just the distant sky.
Posted by Kell Andrews at 8:08 AM

Nice post, Kell! Very poetic. I have a series of poems that are all about the small things I notice in my garden, and it's definitely a way of keeping the magic alive.

Sometimes the most mundade or innocent with a little twist can easily be changed to scarier than heck! Imagine, children...singing nursery rhymes. Yikes!

One of the things that makes fiction really memorable (for me) is when the author really captures little details in such a way that, when you read them, you nod and say, "Yeah, that's right."

I looked up bloodroot, wondering if it was something in folklore that grew where blood has been spilled. It's actually named for the reddish juice of the root that was used by Native Americans for dye, and it has a lot of other interesting properties. Its seeds are spread by ants and its sap can destroy skin. Your flower might have dozens of great stories waiting!