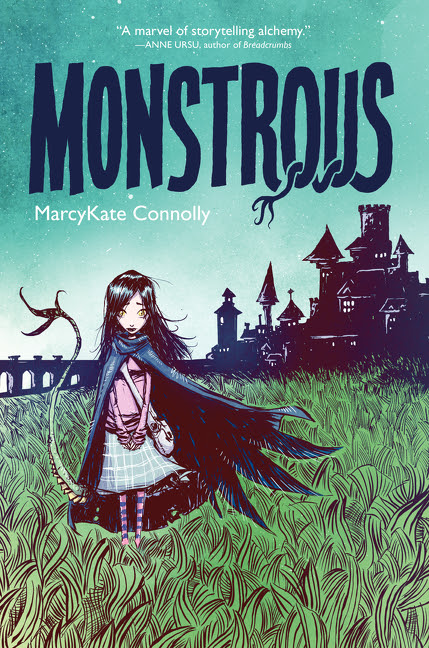 The coolest thing about being a part of the online publishing community is that you get to see the genesis of all kinds of success stories.

I remember, for example, following The Writer's Voice contest in its first year, and seeing a particularly strong query+first page that was garnering a lot of requests. That page always stuck in my mind. And by the time I was fortunate enough to meet MarcyKate Connolly a year or so later, MONSTROUS was already on its way to become a book.

(That page stayed exactly the same, by the way.)

MarcyKate's revision process was almost compelling as the book itself (it began its life as a young adult MS!) But let's talk about the story:


The city of Bryre suffers under the magic of an evil wizard. Because of his curse, girls sicken and disappear without a trace, and Bryre's inhabitants live in fear. No one is allowed outside after dark.
Yet night is the only time that Kymera can enter this dangerous city, for she must not be seen by humans. Her father says they would not understand her wings, the bolts in her neck, or her spiky tail—they would kill her. They would not understand that she was created for a purpose: to rescue the girls of Bryre.

Despite her caution, a boy named Ren sees Kym and begins to leave a perfect red rose for her every evening. As they become friends, Kym learns that Ren knows about the missing girls, the wizard, and the evil magic that haunts Bryre.

And what he knows will change Kym's life.

MONSTROUS is an absolutely unputdownable read. Kym's first person narration hooked me as she learned to navigate the rules and boundaries of her new life. The world of Bryre just comes alive as the pages go on, and The reader takes it all in as Kym does. But occasionally the reader sees things Kym doesn't, too. While I can't dive too deeply into plot details without spoiling all of you, the story rarely seems to take the easiest turns for its characters. I had to keep reading just to make sure everyone would be okay!

This MG fantasy has been described as "Frankenstein as told by The Brothers Grimm," which I think is about as accurate as you can get, and MarcyKate seamlessly combines the fear, love, and sacrifice of a great fairy tale with Shelley's question of what it truly means to be human.

MONSTROUS comes highly, highly recommended from this reader. Go check it out now!
Posted by Becky Mahoney at 7:01 PM