Pets and Peeves, the Unexpected Heroes of Fiction

Here's a Friday writing tip to get you started on your weekend writing binge.

Give it a personality, a driving motive, setbacks, and final triumph.

Remember Peeves, the poltergeist of Harry Potter fame, who would only listen to Fred and George Weasley?

In the book, as Fred and George ascend on broomsticks amid a tantalizing display of illicit fireworks, ready to leave Hogwarts for good (for now), their parting words are, "Give her hell for us, Peeves." It's not in the movie, but here's the scene to jog your memory:


Throughout the well-woven story, ghosts play a contributing role, whether the conundrum is solving a murder, figuring out a clue, or finding the final Horcrux.

In the same series, animals play pivotal roles. There's Hedwig the loyal snowy owl, without whom Harry's lonely summers would be unbearable. And there's Buckbeak, a hippogriff who is only misunderstood, according to Hagrid. Buckbeak flies in to save another misunderstood creature, Sirius Black, from the kiss of death.


If one were to take out all the ghosts and animals from the Harry Potter series, the story would fall apart. There'd be no Aragog the giant spider or Moaning Myrtle to tell the morbid story of her death or Fluffy the Three-Headed Dog to guard the Sorcerer's Stone.

For a more realistic fiction approach to animal characters, read Where the Red Fern Grows. There's a story about two canine characters with personality, heart, and character arcs to rival any human story.

Do you have an animal muse at home?

Here's one of mine doing what she does best: Playing with the kids in all weather. 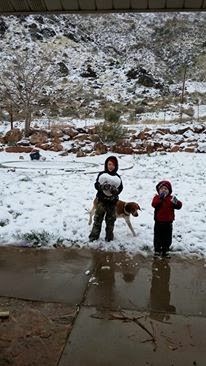