A few weeks ago, I needed a break from drafting the Crow's Rest sequel, No Man's Land, and realized I didn't have any teasers made for Crow's Rest. You know, those images with a quote from the book that get shared around Facebook, Twitter, Pinterest, Instagram, etc? (Here is a helpful post on what goes into a great teaser at the Cover Your Dreams site)

In true writerly fashion, I seized on this excuse not to write opportunity to envision my book in another medium and started combing Crow's Rest for quotable text. This was much more difficult than I thought it would be--a lot of the sections I love from the book either needed more setup, or they were too spoilery.

But I eventually had about nine excerpt possibilities, several of which got trimmed down even further for the actual teaser and a few that didn't get used at all. The opening lines even fit perfectly with some video footage I'd taken, so I have one video teaser as well as the still teasers I made.

There are lots of programs you can use to make your own teasers, btw; PicMonkey is popular and writer Sarra Cannon walks you through how to do that here, or check out this roundup of online sites to combine quotes and images. I used Photoshop because I already have it, and know how to use the tools. I also have tons of my own photos since I'm a photographer, but I didn't have very many that exactly fit how I envisioned the teaser.

Fortunately, Shutterstock sends me 15 or 20% off coupons every once in a while, so I got 5 downloads fairly cheaply. Then I spent some time finding just the right images for each quote--with some false starts. For example, one teaser features a kiss in the hay, and I found one that I thought was perfect--but the hay in the picture was so busy-looking that it was difficult to read the text overlaid on it. Tried various ways to make the text stand out, but ultimately abandoned that photo for a different background (and I love the way it turned out).

I'm planning on revealing one teaser on the Crow's Rest Facebook page every other Tuesday, but I've only shared one so far so I'll use it as an example. I started with the text:

Overhead, the stars unfolded without the interference of streetlights, and a chorus of summer insects buzzed...the leaves of the sycamore shifted and rustled. But—no breeze. A sound like muffled croaks and squeaks—or whispers—joined the rustling. Am I more rattled than I thought, or is there really something in that tree?

Those lines begged for a spooky tree in a field of stars, and I found several candidates on Shutterstock. I narrowed my choices down to three, and played around with the watermarked versions to make mockups and see which one worked the best. The one below was a clear winner, so I used one of my credits to download the high-res version and added the text, book title, my name, and the publisher's logo. 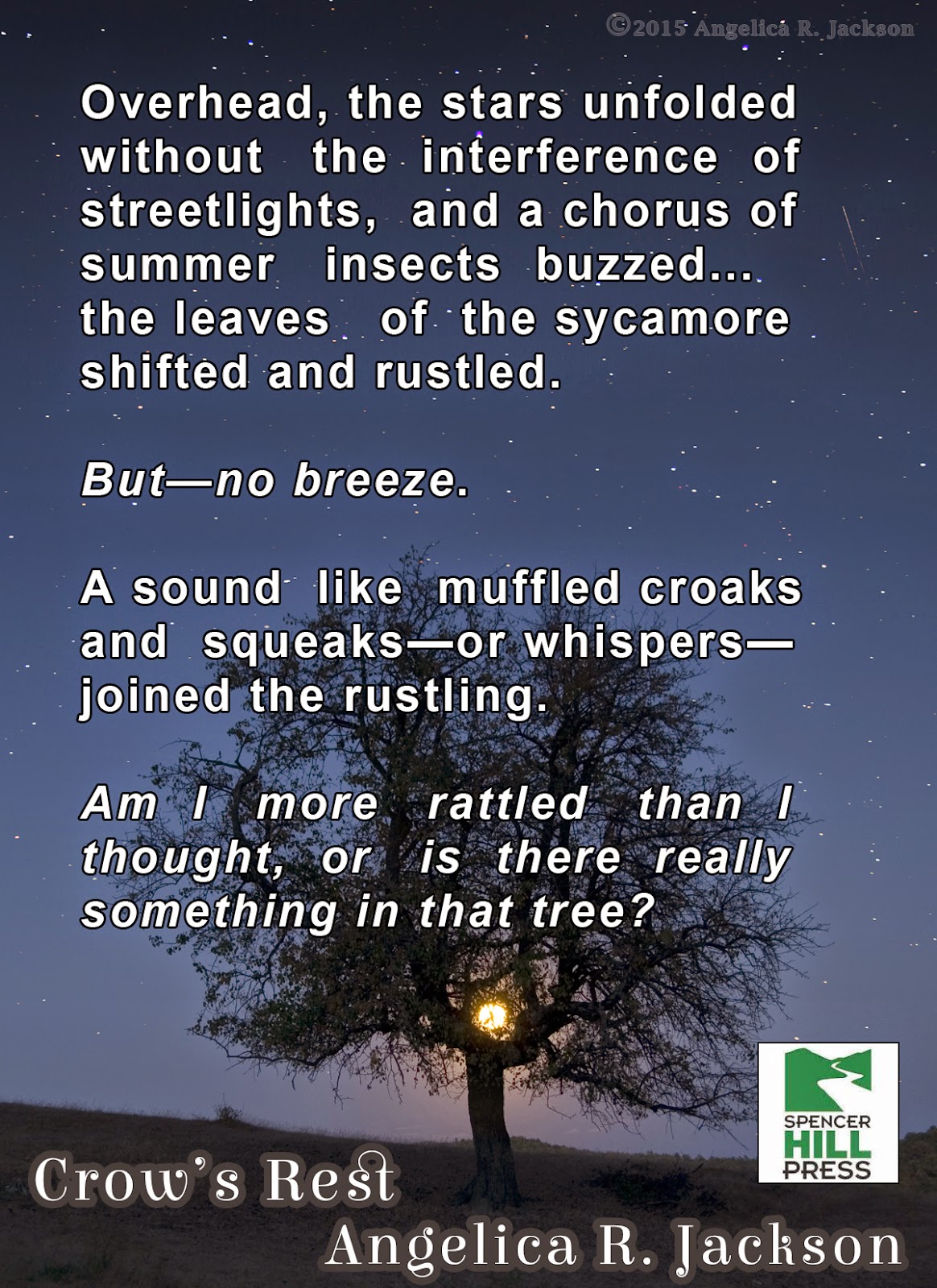 I mixed up the styles of the images and text for each of the rest of the quotes, since they all have different tones: sexy, whimsical, spooky, suspenseful, etc. I could easily have gone crazy and made enough of them to post every week until the release in three months, but it just didn't seem like that much time spent on it could be justified.

So I settled on a reveal every other week until the launch, and I took advantage of scheduling them ahead of time on Facebook and Twitter (using Hootsuite). The teasers will also find their way onto my blog, my website, and maybe my author page on Amazon--wherever I think I can make them earn their keep, lol.

If you have a favorite teaser, feel free to share the link in the comments!
Posted by Angelica R. Jackson at 4:00 AM