Giftmas Blog Tour Guest Post: On This Day of Christmas, My True Love Gave to Me . . . by Eileen Wiedbrauk

Operation Awesome is participating in Rhonda Parrish's 2015 Giftmas Blog Tour. All the guest bloggers are welcome to write about anything they’d like so long as their post touched on a December holiday in some way, no matter how tangentially. The blog tour extends across many blogs as well, and you can find more on social media using the hashtag #GiftmasTour.

We’re also giving away a whole whack of prizes (check out the list here) which you can enter to win using the Rafflecoper code below. Whatever December holiday you celebrate (or don’t) winning a stack of books will make it better!

On This Day of Christmas, My True Love Gave to Me . . .
by Eileen Wiedbrauk 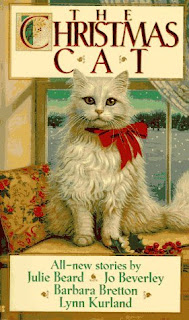 The first holiday romance anthology I ever read was The Christmas Cat. I was probably 13ish because I remember reading these on the bus coming home from middle school. My mother had been in the habit of buying me all sorts of animal stories like All Creatures Great and Small and Cat Stories by James Harriet. This was no James Harriet. Inside were indeed stories of cats. Cats who used their nine lives to bring together couples, either through traveling through time or reuniting lovers who shouldn’t have separated to begin with.

Cats and sex as it turned out. Holy hot Lord of Misrule!

I was hooked on holiday romances from then on. And not just the sexy ones either. But just about every made for TV Christmas movie. Have you heard the episode of Ask MeAnother where they give two contestants Christmas movie scenarios and try to get them to guess which are real and which are made up? The contestants failed miserably. Meanwhile, I was shouting at my radio, No, no, that one’s real! I’ve seen it! Twice!

So of course, as Editor-in-Chief of WorldWeaver Press, I wanted to put together an anthology of fantasy and paranormal winter romances! 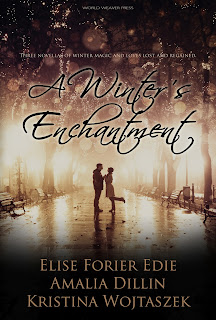 In 2013 we came out with A Winter’sEnchantment, a three-novella anthology of winter magic and loves lost and regained. They included The Devil inMidwinter by Elise Forier Edie, a melding of Mexican and Central American folk and fairy tales with a modern Mexican American girl who’s being pursued by a demon and a boy who burns and burns. Both would have her for his own, but figuring out which, if either, would help save her will be her real challenge. It also featured a novella in the Fate of the Gods series by Amalia Dillin, which follows the many, many lives of Eve reincarnated. This one in Taming Fate takes plase in France in the Middle Ages, where Eve is facing down the plague while facing a new marriage that isn’t . . . well, just isn’t. And the third novella, Opal by Kristina Wojtaszek, is a gorgeous, lyrical melding of many fairy tales into a bright new story following the intersecting lives of a magical girl born as an owl and a boy trapped in a tower.

Then when we launched Red Moon Romance, our first imprint, focused on—you guessed it—romance, we of course had to come out with a sexier holiday anthology. 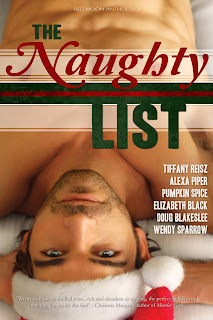 If you’re a writer looking to submit to a holiday anthology, there’s always a publisher out there looking to put together another bundle of holiday romances—I’m not the only reader who’s hooked!

The most important thing to keep in mind when submitting to a holiday anthology is timing. Many publishers put out a call for submissions in the early months of the year for holiday stories with a deadline as early as March, if they’re anthologies, or August, if they’re magazines. When editing A Winter’s Enchantment, I couldn’t stomach the thought of reading Christmas stories in the middle of a sweltering summer, so I purposefully set our reading period as December and January to create extra time before bringing out the anthology the following winter. It’s best to keep your eyes peeled as these calls pop up throughout the year and are usually only open for short windows since the publishers have much less date-of-publication flexibility as compared to other projects.

Another thing to keep in mind is that holiday romance anthologies are often filled by invitation. This means that writers whom the editor knows are solicited by the editor to send her a story. The best way to have a story solicited is to have worked with that editor before or to have enough work out that you become known to her. In both A Winter’s Enchantment and The Naughty List, the final table of contents was a mix of stories sent to us through regular submissions and stories from writers whom we specifically asked for work.

Why write a holiday novella or short story? If you usually write novels, a holiday story can be a great tie-in, a chance to expand on already established characters by showing them briefly in a short story. Jumping into an anthology or bundle can also be a means of gaining the attention of new readers who come to the anthology with the intent of reading another author in the anthology and then discover your work. It can also be a great chance to explore and showcase cultures, modern or historical seasonal traditions, and holidays that aren’t as well known. The holidays have the tendency to bring out the best and worst in people, and tension like that should not be overlooked in story writing.

Eileen Wiedbrauk (eileenwiedbrauk.com) is Editor-in-Chief of World Weaver Press and Red Moon Romance as well as a writer, blogger, coffee addict, cat herder, MFA graduate, fantasist-turned-fabalist-turned-urban-fantasy-junkie, Odyssey Workshop alumna, designer, tech geek, entrepreneur, kdrama devotee, avid reader, and a somewhat decent cook. She wears many hats, as the saying goes. Which is an odd saying in this case, as she rarely looks good in hats. She writes creepy fairy tales like this one and can be found on Twitter @eileenwiedbrauk.
Posted by Unknown at 5:00 AM