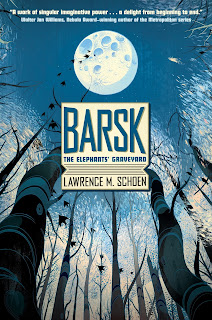 I’ve been at this for a while, more than twenty years writing and selling stories and novels, and in that time I’ve had five books published from small presses (six if you count an early ebook from the days before there were Kindles). There are a lot of pros to being published by a small press, but there are also limitations, even when your publisher loves your work and you’re the biggest fish in that small pond. My new novel, Barsk: The Elephants’ Graveyard, is my first venture in the world of the big press. Specifically, it’s being published by Tor Books, the largest of our genre’s publishers in the US. Or to put it another way, I’m now the littlest fish in the biggest pond.

Accordingly, this seemed like a good topic for this guest post: my thoughts on the pluses and minuses of small and big presses. So, in no particular order, here we go:


AGENTS - I didn’t have one when I sold those books to the small presses I’ve worked with. Heck, in several instances I actually wrote the contract for my publisher (leaning heavily on my own experiences as a small press publisher and cribbing language from a variety of SFWA templates). And because I negotiated those book sales directly with each of my publishers, I didn’t need one. The resulting contracts only ran between one and three pages, but did require me to educate myself on all the points that an author needs to be familiar with before signing a document — in particular what rights are being acquired and when the work reverts.

By comparison, I managed to sell Barsk before I had an agent, and quite literally the same day I received an email from my editor saying he was buying the book I began beating the bushes for an agent. And a good thing too, because the Tor contract ran 34 pages written in dense lawyer-speak. More still, my agent ended up crossing out, altering, and/or amending more than half of the language in the document (yeah, I have a pretty awesome agent). After my other contract experiences, I consider myself pretty well versed on the language, but in this case that translated into knowing that I was woefully under-equipped to tackle a big press contract without professional help.


ARTWORK - I had a major amount of input on the covers for all of my small press books. I picked the artist and I always worked with her and the editor, providing feedback on early sketches and color schemes and all of that. The results were pretty fantastic (and here’s a shoutout to that incredible artist, Rachael Mayo!). More recently, with Barsk I had no input into the artist. Instead I had Tor’s legendary art director, Irene Gallo, who enlisted the astonishing (and award winning!) Victo Ngai to produce one of the best book covers I’ve ever seen in my life! I really lucked out here, and I have no explanation how or why.

Seriously, we’ve all heard the horror stories of mass market paperbacks showing blonde, blue-eyed characters on the cover when every person in the book is described as dark and swarthy. It’s a great thing to have influence in the cover of your book, and that may be one of the biggest perks/reasons of the small press (assuming you have that kind of relationship with your publisher), but there’s a lot to be said for the resources a big press can put behind a cover in terms of the talent they can attract.


TURNAROUND - In my experience, small presses have very small staffs, often as little as the one individual who started the thing. As such, they don’t do as many books, and the publishing calendar isn’t as full. Consequently, don’t be surprised if your book doesn’t need as much lead time and you see the bound result in your hands that much sooner. On the other hand, one of the reasons the process goes faster is because small presses aren’t set up with the same advertising schedules as big presses. Advance copies probably won’t be printed and sent out to other authors for potential blurbs with lead time to include them on the back cover, nor will a team of marketing people meet with bookstore buyers to pitch your book a year before its release date long before your final edits have even been turned in. Small press distribution isn’t as complex an issue either, and the sheer number of copies that will be printed (or which your publisher hopes to sell) are probably an order of magnitude lower at least. But wait, there’s more. Getting reviewed by the major players (by which I mean PW, Booklist, Library Journal, and Kirkus) can be harder. Some won’t review small press at all, or may require longer lead times than are practical for a small press, or insist on a physical galley which your publisher simply isn’t equipped to provide before the book is actually going to press.

In the world of small press where your editor and publisher are the same person, that person is also responsible for all the other myriad tasks, like submitting your book for review and for award consideration. That can be a good thing because you have fewer people to communicate with when decisions are being made, fewer links in the chain. The odds are good that every factor affecting when your book will come out will run much smoother (in terms of months or years!) compared to the timetable of a big press. On the other hand, it also means that when “life happens” your entire project can be derailed for months at a time. Trade offs.


MONEY - Let’s face it, most small presses are a labor of love — certainly the one that I run is — and while the publishers want to make a profit, the ones I’ve worked with also want this to be true for their authors. But it’s a business, and as is true of any business profits favor the company over the folks who supply the product (and this is true for big press as well). Neither size press is going to live or die on the fate of your book. It’s a numbers game and unless you have multiple books in the stream you don’t even have a seat at that table.

That said, in my experience even a low advance from a big press is going to be many times what you get compared to a big advance from a small press. I’ve actually sold foreign reprint rights on some of my small press sales that earned me more than the initial advance. Crazy, right?


RECOGNITION - Issues of money aside, every author I’ve ever met wants to be read. The odds of this happening are better with a bigger press simply because they have greater resources. Copies of your brilliant prose will find their way to a wider audience (this is also true of pirated copies!) and more people will see your work.


WHAT’S IT ALL MEAN? - Probably not a whole lot. Most of us aren’t in a position to choose, particularly at the early part (however you choose to define that) of a writing career. We tend to grab eagerly at whatever opportunities are put in front of us. And too we’ve bought into the narrative that it’s an uphill climb, that bigger is better, that the small press is just a stepping stone on the way to a lucrative big press contract.

I’m not disagreeing with any of that, but once you’ve grabbed that brass ring I think there are plenty of reasons for still publishing with a small press, particularly when it comes to projects that are too controversial or too specialized for a big press to want to invest in.

In the end perhaps the best thing I can tell you, big or small, is that you want to work with someone who believes in your story. This should also be true with respect to your agent. You want to be appreciated. You want to be valued for your vision and your talent. You want to be published by someone who sees you as a writer first and a potential profit second. Or at least, that’s what I want. And in my opinion, achieving that goal is more important than the size of the publisher who’s printing your book. 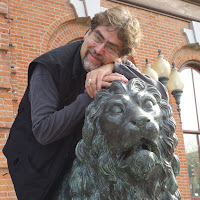 Lawrence M. Schoen holds a Ph.D. in cognitive psychology and psycholinguistics. He spent ten years as a college professor, and has done extensive research in the areas of human memory and language. This background provides a principal metaphor for his fiction. He currently works as the director of research and analytics for a series of mental health and addiction recovery facilities in Philadelphia.

He’s also one of the world’s foremost authorities on the Klingon language, and since 1992 has championed the exploration and use of this constructed tongue throughout the world. In addition, he’s the publisher behind a speculative fiction small press, Paper Golem, aimed at showcasing up-and-coming new writers as well as providing a market for novellas. And too, he performs occasionally as a hypnotherapist specializing in authors’ issues.

In 2007, he was a finalist for the John W. Campbell Award for Best New Writer. He received a Hugo Award nomination for Best Short Story in 2010 and Nebula Award nominations for Best Novella in 2013, 2014, and again in 2015. Some of his most popular writing deals with the ongoing adventures of a space-faring stage hypnotist named the Amazing Conroy and his animal companion Reggie, an alien buffalito that can eat anything and farts oxygen. His latest work is a very different kind of book, an anthropomorphic SF novel that explores prophecy, intolerance, friendship, conspiracy, and loyalty, and a drug that lets you talk to the dead.

Lawrence lives near Philadelphia with his wife, Valerie, who is neither a psychologist nor a Klingon speaker.