Plan ahead, yet think laterally.

I was a lonely child who grew up in an abusive family. Reading was important for me to learn how to behave, because my family didn't teach me. I spent a lot of time in the pages of novels learning about people who lived bravely and honorably in spite of hardship. In a way, my two dads were Alexander Dumas and Charles Dickens. Many authors gave me a skewed code about how to behave, but they also taught me how to overcome odds and adversity with strength. Since authors taught me how to live, I wanted to be one of them, and write about the same kinds of characters that inspired me. I gotta tell you though, I was a pretty weird kid.

My mother's praise. I wrote a poem for her one mother's day, and she thought I was Shakespeare or something like at eight years old. It was probably a very bad poem, but due to my mother's encouragement, I thought, "Hey. This is something I can do. It's mine." I never stopped writing.

4- What inspired you to write a story featuring Ra?

Ra is an interesting god from the Egyptian pantheon. His story has the potential to become one of great redemption. Check out the whole story of Hathor/Sekhmet, and see how Ra gives up his eye and changes his behavior. The Ra we see in The Vessel of Ra is who is left after giving up his eye, a god who believes that humanity are not equal to the Egyptians. The Klaereon Scroll series is largely about redemption at many levels, and Ra is one of those levels.

5- Would you share a picture with us of your book at an interesting location? 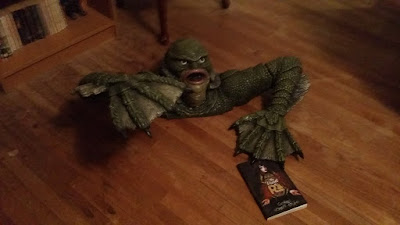 Short term I'm working on two manuscripts for two different series. The one you might expect for me to be writing is the sequel to The Vessel of Ra which is called The Pawn of Isis. The other book is about a junior high monster hunter and is called Abigail Rath Versus Mad Science. Long term, I'd like to finish both of these series and see what other trouble I can get into as a writer. My heart's wish for my writing is for none of you to remember me, but to have all of you remember one of my characters.

My husband Bryon is my longest term, most loyal fan. For him, he's happy to see this novel in print because we've talked a lot about the world and characters over the years, even in books you haven't seen yet. I have a great group of beta readers, and there is a healthy debate among them as to whether Octavia belongs with Drusus or Khun. I'm more Team Drusus, but I can see why many of them are Team Khun.

9- What's the most unusual book swag you've come across?

Jim C. Hines gave out tattoos for his Jig the Goblin series. These still remain the coolest items I've seen an author give out. Ann Leckie gave out lanyards with the names of her spaceships from Ancillary Justice. That was cool. Finally, Mary Robinette Kowal gave out fans for her initial novel in the Glamourists Histories series. I used that fan for a year!

In 2009 I went to the Viable Paradise workshop. In 2012, I journeyed to the Taos Toolbox workshop. Both of the teachers at these workshops helped me stretch my craft in incredible ways. I will recommend writer education as a way to get the technique you need to improve. Talent gets us all so far, but we need to be pushed and stretched, and made to practice.

11- Why do you consider "The Vessel of Ra (The Klaereon Scroll #1)" as your debut book rather than "Hulk Hercules Professional Wrestler"?

I wrote Hulk Hercules Professional Wrestler in 2010. It was a collaboration between myself and Cats Curious Press, and it was a retelling of the 12 Labors of Hercules in today's world, with some characters of my own, but mostly a replay of Greek mythology. There are mythological elements in The Vessel of Ra, but the majority of that novel's world building and characterization are of my own making, and the mythology in the novel is a blending. I think for me it comes down to a matter of how much material I created versus how much I found in already established sources.

When a Klaereon is bound to a demon, their skin is albino. Their blood is blue, their eyes are blue, and they have black hair. I always think of them as characters from black and white Hollywood in the technicolor world, or live Edward Gorey drawings.

I cover a few squares. Carlo Borgia is a displaced person as the novel progresses, and will remain so for a great chunk of the series. Lucy Klaereon, a little person, is a main character with an underrepresented body. Octavia Klaereon has the invisible disability of a curse that makes her function as a schizophrenic. Sofia Borgia is not a main character, but is in a wheelchair. Octavia and Drusus are in an arranged marriage.

Lucy is my classic smart but naive character in this book.

15- Can you think of any small change in the world you could make to potentially benefit hundreds of other authors or readers?

You know, if we gave everyone social security and health care, I think that more people would write awesome books for all of us to read. One of the many reasons I didn't start writing seriously until after I started another career was because I wanted retirement and health care. If I'd had a chance to start working on books, even in 2001 after I'd just finished my PhD, I might be through the Klaereon series now. Just saying.

I want to immerse my readers in the experiences of my characters to the extent that they care when the next book comes out. AND I really want them to remember my characters, even when I'm gone.

Curiosity Quills offered, and I liked that they'd been around in the small press business for a long time. They had beautiful covers and great author support. Their authors had great things to say about working with them, so I went with them. From there, I signed with my agent, who has been professional and thoughtful about my work. I know I would not have learned as much about publishing without her.

I'd be happy to talk about the book or writer education. 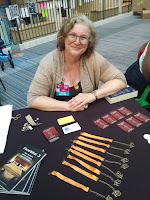 Cath Schaff-Stump writes speculative fiction for children and adults, everything from humor to horror. Her young adult Gothic historical fantasy The Vessel of Ra is available from Curiosity Quills in September, 2017. Catherine lives and works in Iowa with her husband. During the day, she teaches English to non-native speakers at a local community college. Her most recent fiction has been published by Paper Golem Press, Daydreams Dandelion Press, and in The Mammoth Book of Dieselpunk. Catherine is a co-host on the writing and geek-life fan podcast Unreliable Narrators. You can find her online at:
Facebook
Goodreads
Amazon
@cathschaffstump
http://cathschaffstump.com
http://unreliablenarrators.net 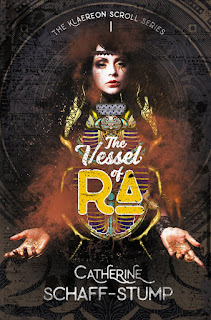 A short blurb about the book:


Octavia Klaereon knows her sister Lucy is the weakest demon Binder in the Klaereon family. To save Lucy's soul, she must kill her sister after Lucy is possessed by the god Ra. Lucy tries to cut the tie between herself and Ra, but Ra possesses Octavia, with his eye on recreating the world in his image. Lucy Klaereon will save Octavia and stop Ra, even if she has to come back from the dead to do it.


The Vessel of Ra (The Klaereon Scroll Book 1)
by Catherine Schaff-Stump
Posted by J Lenni Dorner at 12:00 AM