Seek First to Understand, then to Be Understood

Time to explore another habit of highly effective writers! 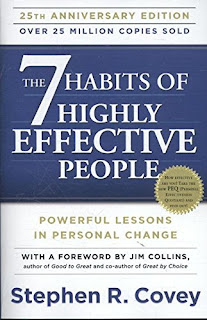 Habit #5 is Seek First to Understand, then to Be Understood. Honestly, there are so many ways I could take this habit and apply it to writers. But because I wrote about communication with other humans last time, I thought I'd write about our characters this time.

For me, and I think for many of us reader/writers, what really makes a book dear to my heart is the characters. Usually, though, when we're pitching a book (querying, or even just describing a book to a friend), we tend to focus on plot. So sometimes, when starting a new project, we think more about the plot than about making the characters memorable. And that's okay for planning and drafting. But there comes a point where we really need to focus on our characters.

Seek First to Understand means really getting to know your characters; why they are the way they are, why they choose certain things, why they like some people but not others. It requires a lot of thinking time, and maybe some writing time, too, if you want to keep track of all your thoughts.

My current book features three girls investigating a haunting in their town. I started writing this book fully intending for the girls to be a tightly-knit team that got along really well. But the main character kept being rude and thinking mean things about one of the others, which was not according to plan! I had to sit back and think about this. I realized that the main character was jealous of a lot of things about the other character, including how easily she navigated social situations. And that jealousy was causing her to be petty.

I thought that was great! Jealousy is a fascinating character nuance that can provide all kinds of insights and interpersonal conflicts. But how would I get that on the page? How could I make my character be understood?

This is where "show, don't tell" (everyone's favorite writing advice!) comes into play. If I have my character say upfront, "I was jealous, and that's why I was being so mean," it doesn't pack the same emotional punch as it would if the reader and the character discover it together over the course of the book. So we help the character be understood by showing her feelings. Being mean out of jealousy is different than being mean out of spite or disgust. You can show those differences through the character's gestures and internal sensations described on the page.

My favorite resource for showing emotions is The Emotion Thesaurus, by Angela Ackerman and Becca Puglisi.

Understand your characters--make them rich, nuanced people, not just props for your plot. Then help them to be understood by your readers by showing their emotions on the page.

What are your tips and tricks for showing emotion?