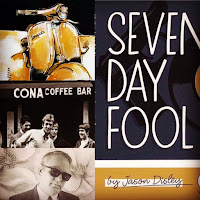 
1- Is http://suavecollective.co.uk/ the only place to get your book, and are there plans to put it on Amazon or other such retailers in the future?

Seven Day Fool is available from the publisher Suave Collective Publishing and Amazon.co.uk it went on the Amazon site a few days ago. I think that as the publisher is only a small independent - it is been sold via Amazon with the stock being sent out by the publisher direct.

2- What was the deciding factor in your publication route?

I self publish poetry through Lulu.com - but have always wanted someone to appreciate my writing and to want to publish it on its own merit. Jason Brummell the head honcho at Suave Collective saw that merit in my writing when after having a series of conversations he read an early draft of Seven Day Fool.

It is the first official story I have had published via a publisher. All of my other books are collections of poetry which have nods to the original Beats in the 50s and the Liverpool poets of the 60s. Apart from my first two collections published via AH Stockwell - all of my poetry is self published. There are also a lot of music references throughout my work. My next project to be released is actually a Spoken Word album titled "Speakeasy" 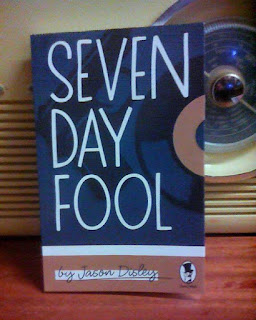 4- Please share a picture with us of your book.

5- How do you define a Mod club and the mod subculture?

Mod or Modernist subculture is an ever evolving movement of likeminded souls who take what they like from all sorts of sources and take them into new directions. So although to those not "Sussed" it looks all very Retro it actually isn't. Modern day Mods take what they like and assimilate it into their own individual life. For each individual Mod is going to be different. Aesthetically it's about detail and being sharp. Style is paramount. Yes the initial Mod movement is associated with the 1960s but the original Mods were the postwar teenagers who were initially into Modern Jazz in the 1950s - there has been many incarnations of Mod and the multicultural element has always been there. As they have taken on fashion styles from various sources such as Italian and French style next to Hollywood styles and of course music from other countries such as Jazz, Blues, Soul and Ska. I could go on forever and a day to try and explain Mod. A Mod Club is generally a place where these likeminded people would go to listen to great music, some of which is from the past but rare (so therefore new to the listener) or brand new music that may wear it's influences on their well tailored sleeves. It's the place where the "in crowd" feels it should be. But like anything as it becomes mainstream and invaded by the masses - so those that are at the forefront are faced with a decision- either stay still - or keep on moving. Naturally they look to move forward. It's what we would see as quite a "Punkish" thing to do. But it is all about doing it for yourself and your friends. It about making things happen. That is why the scene has endured and evolved - adapting throughout each decade. Sometimes it's more obvious - at other times it's more underground - but it is always there.

6- What five words represent your most notable characteristic or values? #In5Words


8- Can you share a story from your life that shows who you are as a person and why you are a writer?

When I was about Six my Nana (Grandmother) gave me a ladybird book about Charles Dickens. It had a brief bio about him and pictures from his various tales. At the start of the book there was a picture of Charles Dickens on a stage on his own reading to a packed theatre. From that moment seeing the power of writing I wanted to write. So even at a tender age it has always been an ambition. One that have always had and have never shaken.

9- What ignited your passion for writing?

See above - but also reading a lot.

10- Who is currently your biggest fan? What does that person love most (or "ship") about your debut novel?

I am not sure - I have however had a surprise gift of a ceramic statue of a smart detective style character in a Trench Coat arrive with a card saying "and the award for his writing goes too Jason Disley" from a fan.

11- Do you prefer coffee or tea to drink?

Typically like most Mods it's Coffee. I spend a lot of time going for coffees.

There is no specific emotion - I want readers to feel all of them at whatever given moments. Different situations give rise to different emotions. There is one scene where my protagonist is caught in the pouring rain wearing the wrong type of shoes - he is naturally a bit angry with himself and has taught himself a lesson.

13- What most helped you to improve your writing craft?

Both reading and writing. Being into the Mod scene you have a thirst for knowledge so you are always wanting to know more about something. It's all in the detail. Listening helps also of course.

I think my character Jake Brody resembling a young Michael Caine. As the book evolves so he resembles Caine a bit more. Adopting the style of hair, clothing and wearing glasses.

Immigrant or Refugees
The story is based around a pair of illegal immigrants escaping there Gangster Father.

Jake Brody is a Private Eye - he is clever and thoughtful but also takes some risk which can backfire. So he definitely falls under the Smart but Naive camp.

17- Can you think of any small change in the world you could make to potentially benefit hundreds of other authors or readers?

Make distribution easier. Large chain bookstores can be incredibly hard to agreeing to stock your books on their shelves so therefore you are often limited to online sales. Which is fine - but still doesn't beat picking up a copy from a bookshelf and holding it in your hands before you buy.

18- As a reader, what most motivates you to buy a new book to read?

Either the subject/genre or recommendation from people you know and respect. Eye catching bookcover.

19- How will you measure your publishing performance?

If the first print run sells out - I will be happy and of course actual feedback that it has actually been enjoyed.

20- What are some of your short and long term writing goals?

My goals both long and short are to keep on writing. My dream is to succeed well enough to give up my day job in retail and to be able to write full time. As at the moment it's a juggling act. I have a new poetry collection due to be released early next year and I am also planning a sequel to Seven Day Fool which will see Jake Brody getting involved in a tale set in 1966 in London just prior to the World Cup tournament.

21- What is one question which you would like the readers of this interview to answer or remark on in the comments?

Do they want a sequel?

Here is an excerpt:

A little taster of SEVEN DAY FOOL by Mordernist Beat Poet Jason Disley whose first novel is available for pre-order via www.suavecollective.co.uk for just £6.99 plus P&P

It is a noir thriller paying homage to the pulp novels of the '40's and '50's but set in and among the Mod clubs of 1965 Manchester.

Strictly limited in number so order now to avoid missing out.
--
The Twisted Wheel club could be considered as seedy, but there is something about such places; knowing it’s a seedy den of iniquity just makes a place more exciting, more enticing and seductive. It was dark and very atmospheric and from 11.30 pm until 7.30 am it was the place to go on a Saturday night. All-nighters were simply the coolest things of all to a generation of music loving thrill chasers. 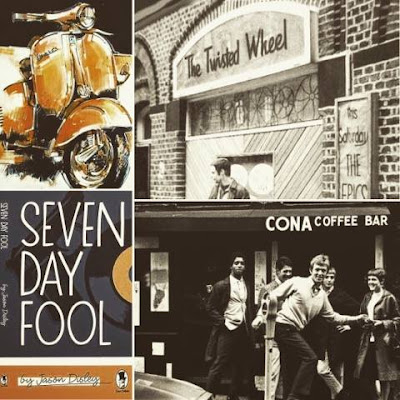 Situated on Whitworth Street, the club was entered via the cafe at Street level, on the left-hand side there was a soft drinks bar, nearby were various tables that record collectors and dealers swamped with their precious stacks of 45's. Nearby were the Gents toilets, where those that dealt in other things, peddled their illicit wares. Beneath them was the warren of rooms not unlike its previous dwelling on Brazenose Street. Tonight's headline act was Junior Walker and the Allstars, an act that would undoubtedly be popular. Billed to play for an hour at 2am when the place would be jumping and in full swing. I could already imagine that the crowd would be an all sweating, hot, giant, moving and undulating single organism, gyrating to the sweet music, as their pills of choice kicked in. Drugs weren't known by their medical and chemical names but instead by their colours. These little tablets of speed, that were: blue, purple, yellow and even red and green, coursing through their bodies, making them chomp on Wrigley's gum and talk about how great everything was. The atmosphere in here is palpable, electric even. The music is inviting promises of love, freedom, loss and desperation and the feelings of new found love again. It is cool to be there - to be part of what is going on. 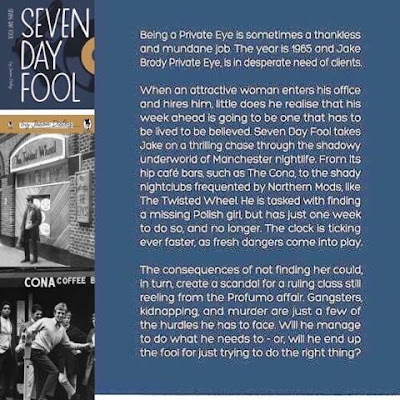 The disc jockey at this time of night before the live act is called Bongo von Dort. He wasn't one of Roger Eagle's disciples, but he too was enthralled by Roger's immense knowledge of black American music, and in conversations with him, he too would wax lyrical about tunes on the Chess record label or the music coming from Stax. He was as passionate about the music as those out there on the dance floor. He would drop the needle on the record, chomping on his gum, grinning like the proverbial Cheshire Cat as another great tune would take the crowd down another rabbit hole to Wonderland.