We're thrilled to have K.L. Lantz here today, a former OA teamie, as she celebrates the release of her book! 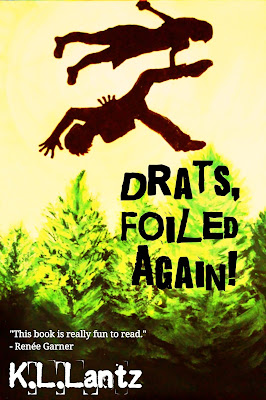 Thank you to the amazing operatives of Operation Awesome for having me today. It's a very special day for me and for my kids, as well, who have been waiting patiently for me to turn the book on my phone into a real book they can hold and smell. The smelling is a big deal! I have five boys, all obsessed with comic books, ahem, I mean graphic novels. All of them have donned super hero capes at one time or another and like to spend their Saturdays playing LEGO Avengers on X-Box. As you can imagine, a story about twin brothers with super powers has been a real hit with them. My family loves the Gilbrinkle boys, and we hope you'll enjoy their story, too.

While the protagonist is male, I myself am a woman, and I couldn't resist putting some very strong female characters into Drats, Foiled Again! Some of them are really good and some are pretty evil. What I hope readers get out of this story is that no matter the circumstances of their birth, each and every person in the world must decide their own destiny, including where they want to sit on the vast spectrum between what is good and what is not.

Since these ideals are kind of a hornet's nest of controversy, I felt it was important to include Family Discussion Questions in the back of the book. These questions are both leading and open-ended on purpose, to inspire vigorous disagreement or passionate advocacy for one's cherished opinion. The absolute best place to have these types of discussions is at home with your loved ones. In my home, we don't shy away from tricky subjects, even though my kids are still very young, the oldest being just eleven. Reading difficult but intriguing books like The Giver together has brought up some incredible family discussions that have taught us all to see the world a little differently than we used to. Drats, Foiled Again! is NOT The Giver. It's far too much silly fun to be confused with such a serious and insightful work!

However, while comic-book-worthy middle grade novels aren't literary novels by any stretch of the imagination, I firmly believe as both a mom and an author that these fun, adventurous tales of diametric opposites and the grey areas in between fill an important need in the lives of children. Actually, they fill that important need in adults, too. Hence, the tremendous popularity of the Marvel and DC Universes on the silver screen. We need to talk about cosmic truth and good vs. evil. It elevates and deepens us. At the same time, the medium of fantasy or science fiction, in the form of gods or super heroes, entertains us, too.

If Drats, Foiled Again! can accomplish these twin (excuse the pun) objectives of entertaining kids and families while deepening their introspection, it will have accomplished all I could ever hope for.

Until the release of evil twin Rupert's side of the story in Bombs Away! Buwahahaha! 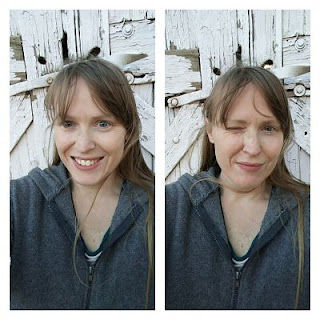 K.L. Lantz was born in Mesa, Arizona. She's a desert girl who finally found home in Southern Utah after quite a bit of wandering about. She's a student at BYU with a passion for neuroscience and literature. She writes books, paints, dances classical ballet, and homeschools her five boys, all of whom love to play superheroes. 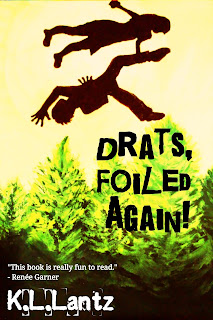 Robert Gilbrinkle is blind in one eye, which makes dodging punches in his Anti-Hero Maneuvers class especially difficult, but his lack of depth perception is the least of his troubles. Nox Academy’s senior project deadline is fast approaching, he's failing three classes, and, naturally, his evil twin Rupert keeps trying to kill him every chance he gets.

But the real trouble begins when Robert’s pathetic superpower--a very unwicked superwink that fixes anything broken--starts to evolve. The kids at Nox used to laugh and call him "Rob Repairman" but nobody is laughing now. His wink threatens anyone who threatens him.

Robert has always known where he stands - on the other side of the hall from Rupert. What haunts him the most is the revelation that maybe he and Rupert aren't as different as he thought. Battling a common enemy brings them closer than either twin can handle, but the lives of their friends are at stake and the thirst for revenge is strong. Maybe even stronger than their disdain for each other.

And don't forget to enter the giveaway! Up for grabs is a $25 Amazon Gift Card, and two copies of Drats, Foiled Again with keychains. Aren't they fun? 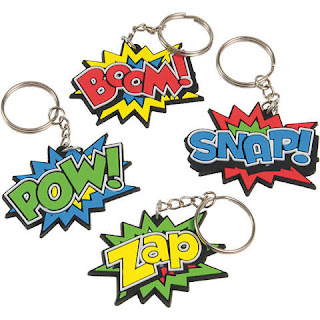 Posted by Leandra Wallace at 7:55 AM