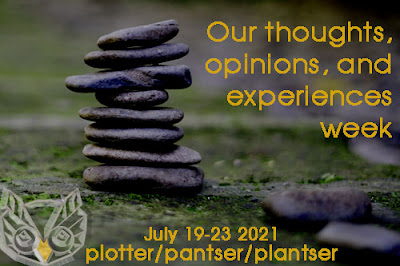 It's been fun this week, seeing how the team like to write.

I'm 100% pantser all the way.  In fact, I'm probably one of the most chaotic writers to ever put words on paper.  I don't even start at the beginning of my stories most of the time!

To give you an idea of my process, I usually think about my stories for a long time.  They're often just germs of ideas waiting for other germs of ideas to collide with them.  I also usually have a large cast of characters wandering around my brain, just waiting for their story to appear.

Eventually (hopefully) some of these characters and some of these idea germs meet up, and then a story starts to pull together.  Idea germs come from all over the place - books I read, newspaper articles, stories people tell me, movies....  I have no idea where the characters come from, just that they are always pretty fully formed with their own pasts and names I find it very difficult to change, even when I hate them.  Thanks, Jason in my latest WIP.  I really didn't want you to be called Jason.  I already have a Jason in another book.

Once these whimsical pieces start to coalesce, I usually write a first scene.  This is not always the beginning of the book.  Often it's from somewhere in the middle or toward the end.  I then work backward and forward, filling in scenes until I have something that looks something like a book.  I do like to write the ending early on because that way I have somewhere to aim for if the story seems to be going way off track.

It's not a perfect way to work by any means, but it's what works for me.  The few times I've tried writing an outline I never finished the book because I knew what was going to happen and where's the fun in that?  And if I start writing from the beginning of the book (or what I think might be the beginning) I tend to write around 10K before I hit the actual beginning of the book.  Which sucks when I'm doing NaNo because that's however many days' writing that's going to end up on the cutting room floor.

So I'll stick with my own process, nuts as it might seem.  And if your own process is a little eccentric, don't worry about it.  Whatever works, right?

Email ThisBlogThis!Share to TwitterShare to FacebookShare to Pinterest
Labels: plotter or pantster