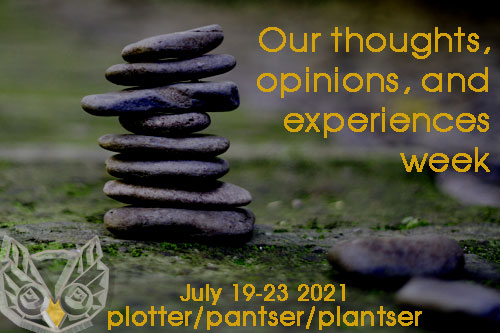 Most of my plotting comes from detailed character and setting sheets. But what about our current 2021 debut authors? Let's review what they've answered!

I used to be a hardcore plotter, but I've found that having everything planned out beforehand just contributes to my procrastination in getting the first draft done. Now I'm more of a Plantser--if I have the first few scenes outlined, as well as an idea of how I want the story to end, I'm usually good to go.
- Pamela Harris

Every project is different and I’ve done all of the above at different times with different stories. I love the improvisational nature of letting a story tell itself, but I also appreciate plot structure when looking down on a project from 30,000 feet.
- Megan E. Freeman

Probably a plantser. I’m a bit of a weirdo. In real life, I like to plan as little as possible and follow the “see what happens” approach. Yet, I am also very organized and prefer to make to-do lists and shopping lists to achieve my goals. When I wrote my memoir, part of me wanted to (and did) put “everything” down I could remember, as a first draft. On the other hand, I made a chronological outline with chapter titles as guidance. Interestingly enough, after five years of work on Plunge, those titles remained unchanged.
- Liesbet Collaert

I am a hardcore plotter. I adopted it because I tried pantsing and it just didn’t fit me. My first drafts were so rough there wasn’t much salvageable when I tried pantsing. I just couldn’t hold everything that I needed to in my head without an outline. So nowadays I play to my strengths. I’m a visual person so typically I’ll outline using cue cards so that I can lay them all out and see the overall structure of my novel. Plus, I really like having my pile of highlighters to color code the cards and make them pretty.
- Emily Victoria

I tend to start a project as a Panster, feeling out the characters and seeing where they will take me. Once I've met all my main characters and have a general sense of where the book is going, usually five or six chapters in, I pause and become a Plotter. I use color coded note-cards to plot out the rest of the book, creating a notecard for each scene or chapter and assigning each character a color. If the character appear in a chapter or scene, I will put their color on the corresponding notecard. This way, I am able to spread my scenes out and see them all at once, while also tracking each character's arcs to make sure they do not get lost. I guess this means I'm a Plantser.
- Jimmy Matejek-Morris

Plantster! I always outline before drafting, but during my rough drafts, I’m always surprised by great new ideas that are more interesting and imaginative than anything I expected.
- Sam Taylor

I am definitely a Plantser. I start with ideas for a story and plot it out the old-fashioned way - on paper. As I begin to write the story, I find new ideas creep in or the characters decide they want to go in different direction. Who am I to ignore them? And oh, the thought of not exploring a possibly better storyline, I wouldn’t be able to live with myself.
- Halli Gomez

Ugh, I’m a pantser. I’m a pantser. It’s the worst. It’s so hard in revisions. I am TRYING to become a plantser. My current WIP was lightly outlined and lo and behold, it helped a ton.
- Maria Ingrande Mora

Plotter 100% - I used to be able to pants the first few chapters and then write a full outline, but I’ve been buckling down even further on my plotting tendencies in recent years! I still do try to pants every so often, just to see if I COULD enjoy it, but it never seems to work for me – I always need the momentum of running down a track I’ve already built, not one I’m building as I go.
When I had a much better memory, I would picture the scene in my head first, then sort of transcribe it, but with the various demands on my brainpower these days, it’s much easier to make copious notes in zero-draft form, then transform it into a full scene. Lately I’ve also been skipping over transitions and reactions if they’re slowing me down too much – I’ll write a basic description of what I’m trying to do in brackets, and will fill it in on my next pass. My plotting tendencies have always made me a bit of a slow drafter, and that’s been great for improving my speed.
- Rebecca Mahoney (former OA team member)

I’m a Plantser – a hybrid. When I first conceived of writing a book on caregiving, it was to create a roadmap, so that was the central organizing principle that got me started. I started my career as a technical writer writing software documentation, so I never go too far without considering what the “end-user” needs and how they need to read it. As I tried my material out on caregivers, I was able to further refine the flow to make my ideas accessible to them: not just what I wanted to say, but what they needed to know.
From there, I simply took a chunk that needed writing and I wrote it. I highly recommend being in a writing group with serious writers. Shout out to Theano-Coaching and the great Kathryn Britton who assembles us and leads us. Every two weeks for four years I submitted installments that moved the book along and held me accountable. When I had half of the book written, I stepped back and reorganized what I had. Many Post-It Notes stuck to the wall of my office were involved. Before committing to a final manuscript, I also recruited beta readers whom I knew were caregivers, to test drive my material. Their feedback was invaluable.
- Karen Warner Schueler

I suppose I’m a plantser. I used to not plot at all, but I have learned to work out a skeleton plot before writing. Over time, I found that I write better drafts when I have some idea of where things are heading but still have space to wander.
- Heather Truett

I am a Pantser through and through. When I first began writing, I thought I would be a Plotter (because I’m fairly organized and tend to be a planner when it comes to other facets of life). I definitely tried to force myself into that role; however, I couldn’t, for the life of me, make it work. I’ve since accepted that I’m a Pantser who likes to have a vague plan of where the story will go.
- Casie Bazay

I think this may more easily apply to fiction writers. That said, with this book I was more of a plotter. Writing is always easier for me when I start with an outline. It tells me where I want to start, where I want to go, and the road to take me there.
- Sherra Aguirre

I’m a recovering pantser. I’ve always just made up my books as I go along, but my friend Molly (Twitter above!) has become a plotter and is sort of taking me along for the ride? Plot and pacing are my weaknesses as a writer, probably because I usually make the plot up as I go along, and I feel like the best way for me to improve is to start actually outlining!
- Anya Leigh Josephs

With memoir I’m a Plotter because I can see the story from beginning to end. With fiction I’m more of a Pantser because I sometimes have no idea what is going to happen until it does.
- Melanie Gibson

Definitely a Plotter. I adopted this style because it allowed me to focus and have a sense of where to head to next as I write but isn’t so rigid that I can’t divert from it.
- Krista Nerestants

I am definitely a Plantser. I usually have a rough outline that I write down on paper, but the story usually changes--sometimes a great deal!--once I start typing it out on my laptop.
- Susan Dalessandro

I’m a Plantser. I work off of a rough outline, but this changes as I write and research.
- Jessica Speer 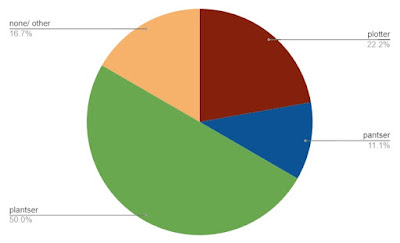 Published Popularity = Plantser wins!
Based on the published debut authors of 2021 that I've interviewed here this year, the most popular method to complete a book is 🌱 PLANTSING (a combination of 📑 planning and plotting, and then writing by the 👖 seat of one's pants).


Which method have you used, and have you finished writing a book using that method?
Posted by J Lenni Dorner at 12:00 AM