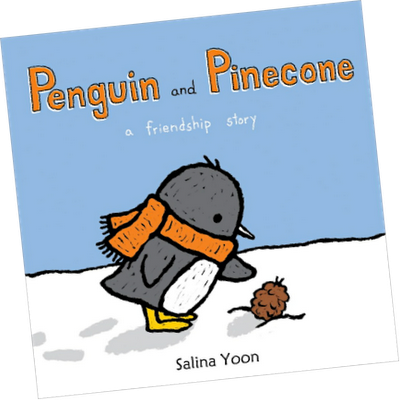 This week Operation Awesome features the amazing author/illustrator Salina Yoon, who celebrated the release of her first character-driven picture book, PENGUIN AND PINECONE, A FRIENDSHIP STORY (Walker and Company) on October 2.

What's so amazing about Salina is that while this book is a milestone for her, she has actually illustrated, written, and designed nearly 200 interactive, novelty, and concept books for young children! I had the pleasure of reading a wonderful draft of one of Salina's upcoming books, and I was surprised to find that she considers herself a beginner at writing character-driven stories. Her devotion to learning craft inspired me in writing my own picture book manuscripts.

Still, I had to make her explain the difference between the books that made her name and wonderful stories like PENGUIN AND PINECONE, which is receiving rave reviews everywhere. Believe me, Salina is busy, so I'm so pleased she shared these answers with us.


You are celebrating the release of your first character-driven picture book, but you've worked on nearly 200 interactive and novelty books. I don't know if all readers know the difference between the two categories. So what is the definition of an interactive or novelty book?

Novelty and interactive books are books with interactive elements designed into the book, usually for our youngest audience (though there are novelty books for older children and adults as well). A novelty book may include lift-flaps, touch-and-feel elements (cloth or textures embedded into the book), sliding elements, tabs to pull, wheels to spin, special peek-a-boo die-cuts, sound buttons, and even pop-ups are in the category of "novelty." Almost any book that is different from your standard book format is considered novelty which opens the door to lots of creativity in this genre. I have done a few concept picture books (COUNT MY BLESSINGS 1 THROUGH 10, CHORES! CHORES! CHORES!, SUPER BABIES ON THE MOVE, all published by Penguin), but these are different from narratives.

How did you first get published? And how did you come to publish so many books . . . all without an agent?

I worked as a designer/art director for three years at Intervisual Books, a book packager/publisher that specializes in interactive and pop-up books. Best publishing education EVER! It is there that I learned about novelty books, and there that I fell in love with them.

My passion for them grew and grew, and the more I designed them, the more I wanted to illustrate them too. I was given the opportunity to illustrate a few books while employed there, as a freelance project. This gave me some credibility in the world of publishing, and later lead to Cindy Loh, editorial director of S&S at the time, to contact me about illustrating a novelty book written by another author. I was actually floored when she contacted me. Numb, and in shock.

This was the year I had left my job to relocate to San Diego to be with my fiancé, now husband, and was freelancing, hoping for book deals with my former company. Intervisual acquired many novelty titles from me, but I hadn't even considered submitting my books to NY houses at the time.  I quickly jumped at the chance. Thankfully, Cindy was happy enough with the project to ask me to illustrate another novelty series. But this time, she asked me if I could write the text as well. I'd never written anything other than first-words books. But I also couldn't let this opportunity slip away, so I quickly told her yes. (See a pattern?) Cindy was kind enough to edit my clunky text and make it publishable.

After the novelty series, I was ready to submit projects of my own. I asked if I could send her something, and she and Robin Corey (former S&S publisher) said yes. It was a project she immediately loved, but after 12 months, ultimately had to pass due to pricing issues. So I built a new dummy set and sent it to Penguin as an unsolicited submission. (Building dummies are time consuming, so I would only build one set and target one house at a time until I heard from them.)

I had no agent, no connections at Penguin, just an address from my Children's Writer's and Illustrator's Market reference book. It took about six months before an intern called me on the phone to say they love it, and if an editor could call me to discuss a deal. It was an incredible eight-book deal. I remember this moment because I was pregnant with my first son (now 8 1/2 yrs old). I was also publishing lots of novelties with S&S at the time. Two years later, Penguin offered a 22-novelty book, two-year exclusive deal. This is how I came to publish so many books, especially with Penguin, and without an agent. Those two houses kept me busy. Robin Corey moved to Random House later. She acquired several titles while there. My Penguin editors moved to various houses which gave me new connections and new publishing opportunities. Cindy moved to Scholastic (who gave me my Cartwheel contact), then moved to Sterling, and now at Bloomsbury. This is all to say that my publishing contact list grew and grew over time simply because my editors moved.

But now, I DO have an agent (Jamie Weiss Chilton at Andrea Brown Literary Agency), and I find our partnership to be INVALUABLE on so many levels.

What is the creative process for interactive and novelty books? Do publishers come to you, or do you develop the ideas yourself?

Mostly, I create the projects myself and submit them traditionally. I create the entire book (design, illustrations, text and format) and build a book dummy to ship out (or digital book dummy that's emailed). But in a few cases, publishers have contacted me to create something specific for their list with general guidelines. But this does not guarantee an acquisition, however. It's more of a suggestion from the editor that I could choose to follow up on or not.

Creating a novelty book is really a unique process because there are three very distinct and important elements to a novelty, and each must work with the other seamlessly: the format, the concept and the art. The format is the physical design of the book, and the added interactive component.  The concept is the idea of the book, including text. And the illustrations must fit the audience AND the publishing imprint, which is why I work in several art styles.

Some of your books, including the gorgeous KALEIDOSCOPE, are highly engineered and/or involve complicated die-cuts and moving parts. What's the process for developing those? Can you think of any specific compromise or change you end up making?
Novelty ideas like KALEIDOSCOPE often start off as little paper cut-outs. I snip away, glue things on, sketch loosely, and try to envision the format. The format is key for novelty. Once I nail the idea, I work on my computer to create the art and design the book. The last thing I do is write the text. But while I build the full-size dummy, it goes through some changes as I find ways to improve it. Changes often occur after acquisition as well, due to pricing, child-safety, or other manufacturing/production issues.

PENGUIN AND PINECONE: A FRIENDSHIP STORY is your first picture book. Why did you branch into picture books? Did the idea come first, or did you decide to write a picture book and brainstorm for ideas?

Picture books seem like a natural progression from novelty and board books, though the process in creating one is entirely different. I was obsessed with the idea of creating a picture book with a penguin character. I just love penguins. So cute! This lead to the first penguin-character picture book manuscript, "Three Little Penguins," a retelling of the Three Little Pigs. Unfortunately, this manuscript was rejected, but we did get a revision request. Passed again. After this experience, I questioned my ability to write a picture book. I took a break and went back to creating novelties. Eight months later, I still thought about Penguin. I decided he needed an entirely new story and a new art style to go with it. I bought a Wacom tablet to experiment with new art styles on Photoshop. (Before then, I'd only illustrated digitally with a mouse.) Penguin was born. And with this, a story emerged.

You've described yourself as a novice in picture books, but with so many published titles, that's surprising to me. How different is it to write a character-driven narrative? How have you worked on this craft?

In writing a character-driven narrative, I have to really understand Penguin's motivations, his emotional range, his physical range, what inspires him, and his understanding of the world. Once I know this, many plausible story lines reveal itself... though they're not always good stories!

I never had to delve into a character before for my novelties. My novelties often lack a central character since they were often concept books. It's an entirely different way of working for me, but I'm enjoying the new challenge!
The character of Penguin is so vivid, adorable, and quirky too. Will we be hearing

Thank you, and absolutely you will see more Penguin books in the future in 2013 and possibly beyond! Please look for PENGUIN ON VACATION next spring!


What other stories and books are you working on?

I am working on three picture books at the moment, two that are story-based and the other more concept driven. I still love creating novelties, but I will be dedicating the next few months with completing these... unless I'm hit with a great novelty idea that will derail my plan.
Can you describe your other books that have released in 2012?

KALEIDOSCOPE (Little, Brown) a poetic novelty with a prismatic lens for children and adults, (look for its sequel, PINWHEEL, in the spring) SPACE WALK and DEEP SEA (Sterling), a non-fiction lift-flap series, HUMPTY DUMPTY (S&S), an Easter-holiday board book, IN THE OCEAN (Macmillan), a first words board book with foil accents, JACK AND JILL (S&S), a Halloween board book, DO CROCS KISS? and DO COWS MEOW? (Sterling), a fun animal sounds book with large mouth-shaped lift-flaps, WHERE'S ELLIE? (Random House), a hide and seek board book, and last but not least, PENGUIN & PINECONE (Walker/Bloomsbury), a picture book, caps off 2012!

Thank you for inviting me to the Operation Awesome blog, Kelly!

Thank you to Salina! Visit her at www.salinayoon.com and look for her books everywhere.

Send
Posted by Kell Andrews at 6:00 AM