Cover Reveal for Donna of the Dead by Alison Kemper!

So I should start by saying that when I was younger, I was terrified of zombies. Couldn't watch even a trailer for a zombie movie without having nightmares afterwards.

But then Shaun of the Dead came along and cured me of my fear, with its wry humor and wit (sort of like when Professor Lupus teaches Neville to picture the scary Snape boggart in his Gran's silly hat).

Well, along came a book that also helped me see zombies in an entertaining light--or more precisely, a main character who slays them with her wit and wits. Donna is a hilarious and kickass heroine!

I know this because I had a chance to read the manuscript early on when Alison Kemper and I traded manuscripts, and now the release date of March 4 is almost upon us! With that in mind, I'd like to share the cover and blurb: 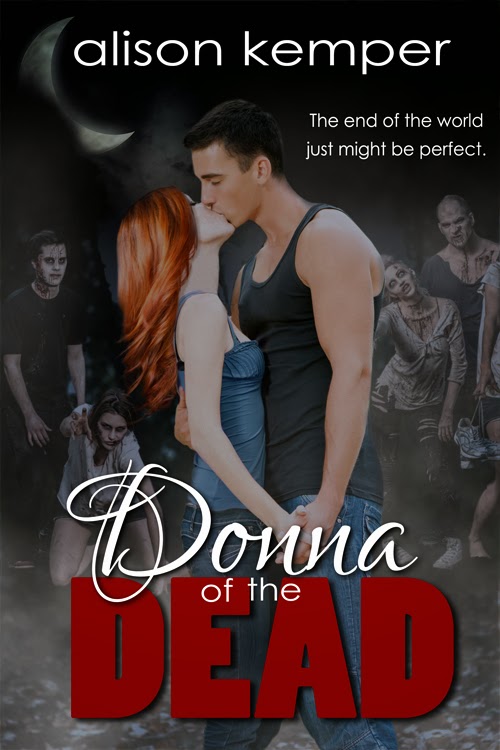 The voices do serve their purpose, though—whenever Donna hears them, she knows she’s in danger. So when they start yelling at the top of their proverbial lungs, it’s no surprise she and her best friend, Deke, end up narrowly escaping a zombie horde. Alone without their families, they take refuge at their high school with the super-helpful nerds, the bossy head cheerleader, and—best of all?—Liam, hottie extraordinaire and Donna’s long-time crush. When Liam is around, it’s easy to forget about the moaning zombies, her dad’s plight to reach them, and how weird Deke is suddenly acting toward her.

But as the teens’ numbers dwindle and their escape plans fall apart, Donna has to listen to the secrets those voices in her head have been hiding. It seems not all the zombies are shuffling idiots, and the half-undead aren’t really down with kids like Donna…

The Donna of the Dead page on Entangled has all the buying details, plus an excerpt! Go check it out!
Posted by Angelica R. Jackson at 1:07 PM

Yes, it really conveys the sense of fun and teen angst