Writing about haunted houses and other spooky inspiration

What are your favorite subjects to write about? I love to write about the supernatural. Ghosts and witches and even a goblin or two always seem to sneak into my writing. I have lived in two haunted houses, traveled into the darkest regions of southern swamps and even fought off an alligator or two. All of these experiences have helped me to write my novel, River of Bones--a scary southern gothic filled with local myth and lore.
My first real experience with haunted houses happened when I lived on a historic farm. If you pressed your ear against a far wall--you could literally hear whispering and eerie cackling. On the outside of that wall was a simple flower garden. There was no reason to hear any noise from that wall. It was really unnerving. People would come to visit and listen to the strange sounds.
After some serious research we called our priest and then a paranormal team to explore the house. After the house was blessed, the investigators came in. They claimed it was haunted by the prior owners who had died in the early 1900’s. The team claimed the first residents were buried in the garden and were not at rest.
Not only was this news totally disturbing but I was horrified that dead people might be underneath my radishes and tomatoes plants! The very next day I hurried outside with my shovel and starting looking for gravestones. I scooped out shovels of dirt and dug for nearly a whole day and never found anything. Not even a piece of headstone. A search of death records and newspaper articles also turned up very little.
Later that summer on a smoldering day a car drove into the yard. Out stepped an older gentleman. I was packing my bags because we had found a house in town and frankly I was tired of all the creepy things that were happening in the house. The man walked up and shook my hand. He told me that he was the grandson of the original owners. I quickly asked him all the things I wanted to know about the house. He was very polite and after a cup of lemonade in the shade I had learned that his grandparents had both died suddenly of unknown causes. Before he left he tipped his hat back and said. “You know my grandparents are buried here don’t you?”
“Where?” I asked quickly.
“Over in the garden.”
I shook my head. “That just can’t be. I’ve searched the garden. There aren’t any headstones or coffins."
“Oh,” he said. “Not that garden.” He pointed to a rosebush on the side of the house near where we could hear the voices. “They’re in the flower garden!”
The hair rose up on my neck and needless to say the paranormal investigators were right. There were dead people in the garden--the flower garden--under my tulips.  We moved very quickly. I’ve always wondered what those voices were saying.  Perhaps they were telling me the tales that went into my novel, River of Bones…. 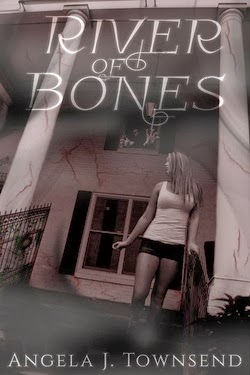 Posted by Angela Townsend at 9:26 AM