About three years ago, I began the submissions process for my novel Foreshadowed. I had a feeling about this one. Sure, I’d had that feeling before, but this time it was real. This time, I was going to get published. It was “the one.”

Most of the names ended up highlighted in red, but there were a few in green…at least for a little while. Eventually, I had an entire spreadsheet dedicated to my failure.

Except I didn’t fail. Foreshadowed was released by 48fourteen Publishing on December 31st.

Despite all the rejection I faced, it was still “the one.” In fact, as I look back on my personal road to publication, I’ve decided that it wasn’t “the one” despite all the rejection, but because of it. I learned a lot from all those rejection letters. And I’m not just talking about lessons of perseverance and believing in myself. I learned to view rejection letters as invaluable feedback from experts. If an agent said she just “couldn’t connect with the characters,” I believed her…and I tried to fix it. If agents said the pacing was too slow, the novel too long, or the ending too flat, I believed them…and I tried to fix it. And if all I got back was a form letter or no response at all, I asked myself “Why?” and—you guessed it—tried to fix it.

Now, granted, writing is a subjective business. You can’t please everyone and you shouldn’t try.

But if you just keep getting, “Thanks, but no thanks,” over and over again, it may be time to take a hard look at, first, your query letter, and then your novel. Try to see rejection as a tool. Don’t look at it as failure, but as a free critique from a seasoned professional.

Keep writing. Keep rewriting. And eventually you’ll write “the one” too. 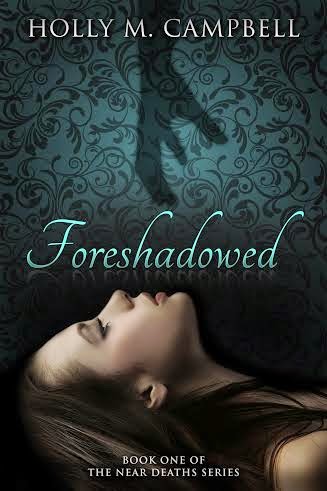 She can’t avoid the dark forever…

Hope Murdoch was born dead. She took a breath two minutes later , and now is an almost-normal sixteen-year-old. Normal: a hopeless crush on the boy next door, a negative body image, and a (mis)diagnosis of ADHD. Not-so-normal: an exhausting and distracting ability to read minds. And high school is hard enough without hearing what everyone really thinks of you.

Lance Hampton used to be normal until a car accident killed him and his parents. Paramedics brought him back to a life he doesn’t want: orphaned, uprooted, living with his uncle, and suddenly able to see how people die. At his new school, he tries to keep to himself. Seeing how complete strangers die is torture enough, let alone friends.

At first glance, Hope doesn’t think much of Lance (though a lot of the other girls do). He looks like the typical bad boy. No thank-you … but then she meets his eyes and everything goes dark.

She hears labored breathing. Rapid footsteps. And then a thud as someone falls to the ground.

Inside Lance’s head, Hope just witnessed a vision of murder … her own.

Together Hope and Lance try to catch a killer before he’s red-handed. A killer who could be anywhere. Anyone. Sure Hope can read minds and Lance can see death, but they still can’t see in the dark.

Holly M. Campbell started writing stories at an early age. In junior high, she completed her first“novel” and enjoyed sharing it with friends and family.

She earned a Bachelor’s degree in English, with an emphasis in Creative Writing, and a Minor in Modern Dance from Brigham Young University-Idaho. As a member of Contemporary Dance Theatre, she performed and toured with the school’s Dance Alliance. She graduated in 2006.

In 2007, Holly met her husband-to-be, but didn’t pay much attention to him until he asked her to help him teach swing dancing at their church. After he flipped her around and hoisted her above his head with relative ease, she fell (not literally) head-over-heels. They married a few months later.

Holly lives in Washington State with her husband and two daughters. She blogs at http://hollymcampbell.com.
Posted by Unknown at 1:00 AM