Making Good Use of Irony

Do you intentionally use irony in your stories? Or does it ironically happen on its own? I suppose that may depend on whether you're a plotter or pantster, but it never hurts to begin marinating the notion that our stories deserve irony where we can pull it off.

Why? It's satisfying to the reader to notice these ironies, and often, the more subtle, the better. Irony adds a special flavor to the story, much like that tangy lemon I squeeze in my butter before bathing a succulent crab leg into it. 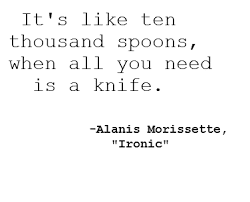 As a plotter myself, I try to add irony into my plotline before ever drafting. For instance, in Butterman (Time) Travel, Inc., the main character, Bianca Butterman, is a futuristic version of a goth-glam girl, who's also somewhat of a control freak. Being as that she's also a time-craft pilot, she has to be. So where is it that the last place an eighteen-year-old futuristic goth chick who spends more time on the web then with real people should end up?

And she is 150% uncomfortable. It's why Bianca ended up being the way she is. I knew she'd end up at Woodstock, so I needed her to be the opposite of someone who'd fit in there.

The result is so much fun, and so ironic.

How about a few of these stories and their use of irony?  See if you can name the book, movie, or TV show:

1.  A ruthless serial killer who skins his victims ... and has a cute and cuddly little toy poodle named Precious.

2. A genius diagnostician sought by sick people from around the world for his incredible ability to solve medical puzzles ... and who's addicted to pain pills to the point of being self-destructive and harmful to others.

3. A self-righteous professor who treats students like criminals and inflicts bodily harm on them as punishment for insubordination ... and who has an affinity for sweet little kittens, which she has decorated her entire office with.

4. A recovering alcoholic who owns a bar and serves other people drinks for a living.

5. A single dad whose wife left him, and who also happens to be a divorce lawyer with absolutely no faith in romance or happily ever afters ... and he falls for a beautiful girl right out of fairy tale who sings to animals and who has never said a harsh word to anyone in her entire life.

6. A young scientist with an IQ off the charts, devout atheist, and fully sold on the theory of evolution ... who grew up in Bible Belt, USA with a mother who is even more devout Christian than the Pope.


Some of these are obvious ironies, others more subtle. The point is, they're so much fun, they really give the stories a special twist.

Next time you're plotting or drafting, ask yourself how you can twist it up a little bit and make good use of irony. Try picking it out of the next book, movie, or TV show you watch. The more we notice it, the easier it is to use it in our own work.

So tell me, can you identify these stories? Do you practice using irony? If so, do you have a special technique? If not, what's holding you back? Please share ...