Thanks to everyone who stopped by! Without further adieu, I present our contest #9 winner:

Flash Fiction Contest #9 Prompt: "The last thing I need is another child. I already have twelve to look after." 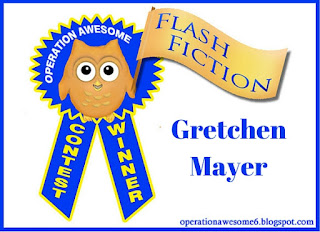 
The pod was sitting on the step when I opened the door this morning. The last thing I need is another child. I already have twelve to look after.

I looked up and saw nothing but dirty gray smoke rolling across the sky. A drone must have dropped it off last night. Perhaps it was a mistake and they would return for it. I lifted it up. It was heavy and would hatch within a month’s time. I placed it in the incubator, closed the lid and turned back to the clones. They were ready. All my hatchlings were ready in time. They were five years old now and would soon be taken away to be trained as warriors. I had done my job perfectly as always – except for one thing.

For sixty years I had been attending hatchlings – 144 total clones – teaching them the state-approved curriculum and nothing more; feeding them the special diet that would cause them to grow quickly and nothing more. But commandment four, “Show no affection,” was one I could not follow. Indoors, where there were no drones to monitor me, I would kiss their identical cheeks and hug their identical bodies.

And for sixty years the war had raged on.

As they slept or studied I would walk the barren hills outside my hut. Being a preceptor is an honorable but lonely calling.

A week passed, then two. No one had come for my hatchlings. This had never happened before and I feared the reason. The war was over. There was no more need for me or my hatchling warriors.

But now I paced the hills for another reason – what was I to do with twelve grown clones? I worried and fretted this for many days.

Finally the new pod opened. It was a slow birth – not the ripping and tearing I had witnessed a hundred times and more. And I could see right away that she was different. This last pod that had been so unceremoniously dropped on my doorstep was a consolation prize – a child I could love and raise t0 adulthood to care for me in my aging. I fed her milk from my cow and food from my garden. I cuddled her and played with her and taught her silly rhymes.

And I sheltered her from the sight of the clones as they rapidly aged and died one by one like stars blinking out at sunrise.

Come back again in two weeks for the next #OAFlash Fiction contest. The week after, I (Samantha) will be sharing a week-long blog series on how to book your own book blog tour. Come back then!
Posted by Unknown at 9:30 PM