Thanks so much to our entrants! I always enjoy reading the entries so much, and for this contest I found myself drawn to K. Mulkane's entry the most (though they were all entertaining). Congrats, K! 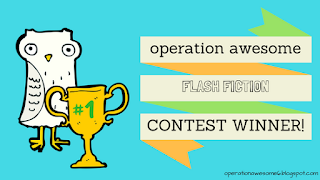 The aquarium should have been beautiful. That’s what everyone said when they saw it. "Look at all those pretty fish, ooh what an amazing gift", but it wasn’t - it wasn’t at all. Those fish were prisoners, and I knew exactly how they felt.It showed up last December - a brand new present. Two guys in brown uniforms came to our door and had my grandma sign their paperwork. “Well now, we didn't order anything like this. Must be a mistake,” my grandma said.One of the guys handed her an envelope. She turned it around in her hands and gave what I can only say was a giggle. It sounded like this girl Emma in my class when she had to answer a question she didn't know. It was not a usual sound.My grandma took forever to open that envelope, like it was a bomb or something. “Oh Eli, It says that it’s a gift from the Masons! Well that is so very thoughtful of them, isn't it?”I just sat there, because I could not ever think of the Masons in that way.The two guys took my grandma’s enthusiasm as a yes and wheeled the monstrosity in on a cart.“Ok, ma’am, where would you like it?”“Oh my, I’m not sure. It’s pretty big, isn't it? Well, I think put it here in the front room. Yes, it will look nice right over here.”Nice? It was going to take up half the room. It didn't match any of the other furniture.“Ok, and here are all the instructions on how to feed and take care of the fish. It comes with six months of free cleaning and maintenance service.”My grandma took a quick, deep breath and twirled the pen the guy gave her. She looked at me, looked at the fish and then quickly signed her name on their form.The delivery guys cleared out.We just sat there and looked at the aquarium like an alien had landed in our living room.I finally wandered over to see it. Fish swirled through the water, and a few hung out at the bottom. A bunch of colorful fake trees and rocks were scattered around. My grandma finally came over and ran her hand over the smooth glass. She bent down a little and peered in at the fish.“Hmmm, well now,” was all she said and then walked into the kitchen.It figures that the Masons would give us this with no thought. My grandma had been cleaning and cooking for them for fifteen years, but they knew nothing about her. If they had, they would have known what a stupid present this would be for us. How’re we going to afford this? We’re lucky we can feed ourselves, let alone a bunch of fish. I looked at it again as the fish glided through the water so easily. It was kind of pretty.Maybe the dumbest and prettiest thing I had ever seen.
Posted by Leandra Wallace at 3:39 PM