A few of my goals include: Start assuming less, and asking more questions. Prioritizing being in conversation with God daily. Lose enough weight so I can fit back into my GAP jeans from undergrad. :)
I’m also working on another YA right now, and it’s really emotionally hard for me—somehow, I thought it would get easier after publication—haha! But I’m chugging along and I hope by the end of the year I can be sending it around.

I grew up in my father’s childhood home: a 50s rancher built by a team of builders who should not have had the right to build a house. So most of my childhood was pretty much my father rebuilding this house. I joke that I became a writer because my childhood produced so many weird things to write about: our dog killing a neighbor’s chicken and dragging it to our doorstep, power outages that could last up to a week, finding snake skins in the walls and crickets in my bathtub… I was an only child, and grew up very content entertaining myself. I used to write to entertain myself, but I find myself now writing to process, relive and cope with experiences. Writing helps me slow down and think, allowing me to be that girl again during power outages, where there was nothing to do but lay on the floor with my eyes closed and listen to cassette books.

3- Do you have a favorite MMORPG?


4- What ignited your passion for writing?

There’s a lot of answers to this. I started writing poetry in seventh grade because “all the cool girls were doing it.” And it stuck. I grew up on books—my mother lived off books, so much so that I’d open the pantry for cereal and instead find an omnibus of CS Lewis. When I’d ask Mom where the cereal was, she’d say it was behind the Brit Lit. And I’d have to pull CS Lewis out if I wanted to eat. I used to hate books (because they weren’t brightly animated TV shows) but came to love them as my mother literally paid me to read books and give her reports on what I learned. So I guess another answer is that I fell in love with writing because I inherited my mother’s love of stories.

5- You also published Your Son, Rotary Phones and Facebook, and A Week With Beijing; what about Post High School Reality Quest makes you a debut author?

PHSRQ is my first published novel. It’s the thirteenth one I’ve written, but the first one to actually get out into the world :) I’ve found the worlds of poetry and prose publication are so different—and already, my journey with bringing PHSRQ has been so different than anything else I’ve ever experienced, and I’m so new to it all!

That’s hard to say because I’ve been thinking about and dreaming of those benefits since high school. I think recently, the benefit of publishing with a great press became clear to me when I learned I was eligible to join the amazing 2017 Debuts group—which has been an invaluable resource.

Definitely my husband. But I’m going to also bring my mother-in-law into this too. My mother-in-law is my ultimate advertiser. Everywhere she goes, she tells people about my book. I gave her some of my new bookmarks, and apparently she’s been giving them out to clerks at Books A Million and Chick Fil A servers. She hasn’t even read the book yet!
But really, my husband is my biggest fan—and that goes for all my writing. I think he’d say that he loves the video game world and aesthetic of the book, the humor, and the spiritual allegories. He’s working to become a game designer, and has already started building an actual text adventure game of the first chapter. Stay tuned—I’m hoping we’ll get it live online for people to try in the next couple months!

In whatever I write, I hope that it makes my readers think about the world around them, and interrogate their own world views and assumptions. I know every time I write, I’m constantly interrogating myself.
I’m not sure a particular scene, but I want my readers to walk away thinking about the relationship between Buffy and the text Parser. In writing the book, I thought a lot about my own choices and decision making. I want people to think about how the story would’ve went if Buffy had made different choices—if we all made different choices. I’d love people to think about those who pursue after them, who desire what’s best for them. I think emotion-wise, I hope people read this, walking away with hope—that even if we can’t respawn at save points, there are always opportunities to start over.

9- Your book cover (on Amazon) playfully states "MS_DOS compatible. Mouse and Joystick optional." Do you think today's teens will get the joke, or is that aimed to make parents/ 90's kids remember their youth?

I doubt it. But the 80s/90s nostalgia is strong right now—so I feel like teens will probably be like, “LOL outdated technology joke I don’t quite understand but appreciate because 90s nostalgia is cool.” :)

10- Is there any diversity we can look forward to in your book?

Something that’s really personally important for me is neurodiversity and neurodivergence. I don’t want to say much more for those who haven’t read the book, but I hope PHSRQ encourages us to re-evaluate how we view “mental illness,” and provides a doorway into conversations about neurodivergence.

11- How did you come up with the name "Buffy" for your main character?

I used to go through BehindTheName.com and find names that had a meaning or sound that intrigued me. I chose that name probably around 2012, and so it stuck.

12- What new release book (other than your own) are you most looking forward to in 2017?

I’m in the 2017 Debuts group so my answer is SO MANY. Some of my favorites are Psalm for Lost Girls by Katie Bayerl, Kat and Meg Conquer the World by Anna Priemaza, The Hate U Give by Angie Thomas, and The Black Witch by Laurie Frost :)


13- As a reader, what most motivates you to buy a new book to read?

Can I afford this? Does the cover excite me? Do I relate to some component of the book, the description, the title? I can be persuaded pretty easily to buy new books :)

That’s a long story. I’ll try to give the abridged version. Pretty much I got an agent when I was in high school and dreamed about the traditional route. That didn’t quite work out the way it expected. As I went to conferences and learned about all my otpions, I realized that there’s a lot of pressure debuting with a traditional press, that you have less control over the process, and that it really isn’t at all in your control. I’m very much a person who likes to have control. I queried California Coldblood, and Bob (the editor) talked with me about CCB’s values, and the small press model. Having been in the poetry world for a while, I realized I appreciated the small press model, where it’s more of a relationship and a conversation. Bob understood PHSRQ and was passionate for it. I could tell that right away, and I knew he was the right person to bring this book into the world. I love working with CCB and am a big fan of small presses. Bob and I have had some amazing conversations about PHSRQ, and he’s made it a much stronger book—I’m eternally in his debt for his honest and thorough feedback, and dealing with me through that whole editing process! :)

15- How did you come up with your Twitter handle?

I wish I could remember. I really can’t remember why the narwhal was confused. But it’s stuck, and it’s catchy. @ConfusedNarwhal

16- What is one question which you would like the readers of this interview to answer in the comments?

Which video game would you like to see adapted into a book, and why?

Let’s be friends! I’m on Twitter as @ConfusedNarwhal and Facebook as @megedenwritespoems. Feel free to check my site out at: http://www.megedenbooks.com
Also check out Post-High School Reality Quest on Goodreads and Amazon. 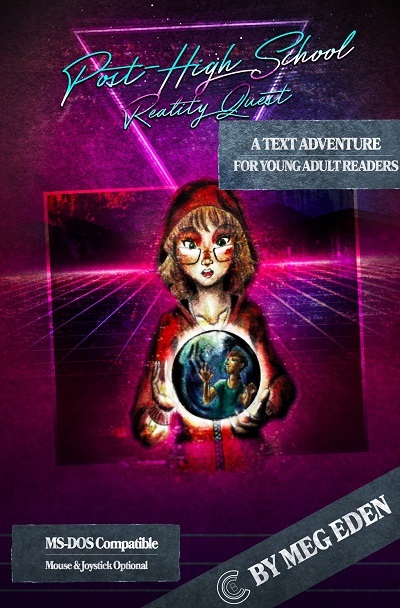 You are in a psychiatrist’s office.

I’m sorry, I don’t understand “No, I’m not”. Who do you think they’re going to believe? The narrator, or the character who is here because she was found living in a telephone booth on the other side of town, talking to yourself?

>This is a doctor’s office. It’s a safe space. Psychiatrist sounds so…

Well, I’m sorry to break it to you but you are in a psychiatrist’s office. You’re here because yesterday, your father found you in the last existing telephone booth in your town, after driving around for days. You were sitting at the floor, stuffed up against the phone, telling someone you wanted them to stop following them, that you were tired of being hacked into. When your father finally wrestled you out of the telephone booth, you accused him of working for the game and tried to hit him with the telephone receiver.

Do you remember any of this? Your mother brought you in first thing this morning, says she’s been worried about you for a while. That you’ve never been very social.

>What do I have to do to get rid of you?

You look down at your wrists. They’re locked into the chair you’re sitting in. Man, they must really think you’re crazy.

You know your mother means well. She just wants to make sure you feel like there’s a way for you to talk about what you’ve been experiencing recently—

>What’s there to talk about? If you’d just leave me alone, then there’d be no telephone booths, no problem!

Isn’t that oversimplifying a little? What exactly does a player do without a game?

>You make it sound like I want to be playing a game in the first place.

Well, you are the one that started it, so yes—it sort of seems to be a given that you would want to be playing a game. Just maybe not the one that this turned out to be.

You sigh and lean back in your chair. You hit the headrest. You hit it over and over, into what might almost be a consoling rhythm.

You wonder: Is that something a normal person does? Or only a crazy person? Or maybe just any kind of person, when they’re fed up with everything not going the way they planned?