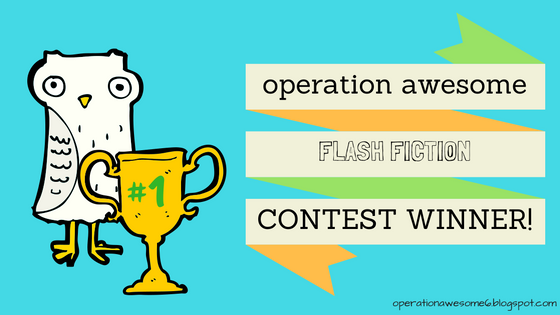 Thank you so much to our entrants! And I'm pleased to share that our winner is Rosieisonthego, with a very heart-rending piece.

The toddler was finally asleep. The young mother's bare feet slapped against the linoleum as she made her way through the small house, searching for her favorite teacup – one that Nana had given her, telling her to imagine a “Nana sugar-hug” when she used it – and the headed to the kitchen. She stood in front of the microwave as it reheated her ginger tea, rubbing her swollen belly and wondering if standing this close to the humming machine would hurt the baby.

When the microwave beeped, she took the flowered teacup and began to wander through the house, muttering to herself. Her whisperings weren't the shopping list, but rather, a two-sided conversation with her husband. Since he was 8,000 miles away, she answered for him as he would have, and smiled at his answers.

She continued the conversation as she weaved her way around the toddler toys strewn on the floor, but her path to the couch was interrupted by the sound of a car door. Curious, she changed direction and went to the window to peek around the curtain edge. Her heart squeezed as she watched a man in Class As shut his car door and join three other soldiers who were dressed the same. She held her breath as they glanced around; her lungs burning as she watched to see which house they would turn to.

Which life they would ruin.