1- You took part in Raimey Gallant's Nano Blog & Social Media Hop. Was it an enjoyable experience? Did you learn anything from it?

Yes, it was tons of fun! It’s always great to make new connections with other writers. I’d say I learned that blog hops and social media hops are effective. It’s a good way to get writers (and readers) involved and interested.

Absolutely! I haven’t missed a year since 2012. It’s always a crazy time—hair pulling and weeping into my coffee—but it’s SO much fun. Drafting without care is therapeutic at times.

Alright, so when I was 9, I discovered Harriet the Spy and decided I wanted to write. I picked up a journal and started writing things down. They weren’t stories. They were just rambling of a young girl. That ended when my younger sister read something I wrote about her and tattled!

Then when I was about 12, I was making up fictional people in my head. Yep, imaginary friends. (No 12-year-old should still have imaginary friends, but…I did.) I’d imagine them walking with me, doing things with me, talking to me. It sounds crazy, but it kept me sane in my not-so-great childhood. Reading any book I could get my hands on also kept me sane. After that, I went on to write fan fiction—mostly about boy bands. ;)

After discovering Harriet the Spy, I got myself a journal and started writing whatever came to mind. Sometimes I’d walk down the street just writing about the scenery. That all stopped when my younger sister found my journal, saw something I wrote about her, and tattled on me. Ha!

5- Who is currently your biggest fan? What does that person love most (or "ship") about your debut novel?

It’s a toss up between 3 different critique partners. But one of them – Katie – has read this book at least 5 times during the process of editing. She’s a Rockstar, and claims to love that Audra’s new heart is almost its own character in the way Audra talks about.

Oh gosh, I don’t think I can pick a favorite episode! But Dean is sooo my favorite character. (Are you surprised?)

I hope readers will laugh a little, empathize with my characters’ pain and trauma, and I’m really hoping for some tears! ;)

8- There are a few pins that mention cigarettes on your board. Do you smoke?

I used to, but I don’t anymore. Some of my characters do though. 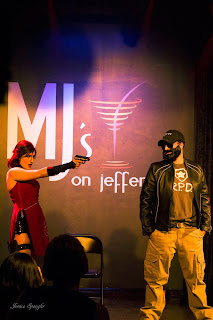 This one almost feels like cheating, but the scar running down Audra’s chest from her heart transplant is absolutely the most visual oddity.

10- I read that you perform in a burlesque show. What's that like and are there any pictures you can share?

In a word, burlesque is life-changing! As a serious introvert, performing for the first time was absolutely terrifying. One of my friends even asked if I had the guts to do it. But I did! Being able to come up with a character and short story to act out on stage is an amazing part of burlesque. I love the crafting aspect, too! And yes, I do have some photos to share.

11- Which character has your favorite Personality Contradiction?

Jake – he’s definitely humorous, but also melancholy. His personality has so many contradictions. He’s laughing and interested, then he’s stand-offish. I do love that back and forth. ♥ 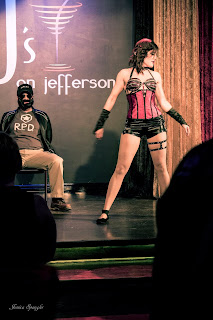 12- As a reader, what most motivates you to buy a new book to read?

Most of the time, it’s because one of my friends told me how amazing a book was. (And they’re usually right!) Covers of course catch my attention, but I never judge books by their cover.

13- What was the deciding factor in your publication route?

I queried this book to agents for over a year, and while I had a ton of agent interest, they ultimately said no because new adult is incredibly hard to sell. But then I submitted it to Entangled and found an editor who said YES. I’ve been one happy girl since.

14- What are some of your favorite Entangled Publishing books that are out now?

Anything by Jennifer L. Armentrout, Pintip Dunn, and Jus Accardo!

15- Care to drop a meme of your choice to share?

16- What is one question (or discussion topic) which you would like the readers of this interview to answer in the comments?

Do you have a favorite organ transplant story to share? Maybe it’s something personal or a YouTube video you stumbled upon. Or even a Pinterest pin! (Like the one I found that inspired The Heartbeat Hypothesis.)


17- Anything else you would care to share about your book and yourself?

BIO:
Lindsey writes romance, though sometimes there’s an added sci-fi or magical realism twist. She lives in Columbus, Ohio (where the weather is never quite right). Her Fine Arts degree has granted her a wide assortment of creative knowledge that serves as inspiration (and not much else). When she’s not crafting YA and NA stories, you'll likely find her spending waaay too much time on Pinterest, playing a video game, or performing in a burlesque show—because she enjoys giving her introversion a worthy adversary. (Plus, it's the closest to Broadway she’ll ever get.) THE HEARTBEAT HYPOTHESIS is her debut novel.

BLURB:
Audra Madison simply wanted to walk in the shoes of Emily Cavanaugh, a free-spirited teenager who died too young. After all, Audra wasn’t supposed to be here.

Thanks to Emily, Audra has a second chance at life. She’s doing all the things that seemed impossible just two years ago: Go to college. Date. Stargaze in the Rocky Mountains. Maybe get a tattoo. You know, *live*.

Jake Cavanaugh, a photographer with mysterious, brooding gray eyes, agrees to help chronicle her newfound experiences. She makes him laugh, one of the only people who can these days. As they delve into each other’s pasts – and secrets – the closer they become.

But she’s guarded and feels like she can’t trust anyone, including herself.
And he’s struggling with the fact that his beloved sister’s heart beats inside her.