Reading With My Kid: A review of THE DOOR IN THE ALLEY, by Adrienne Kress 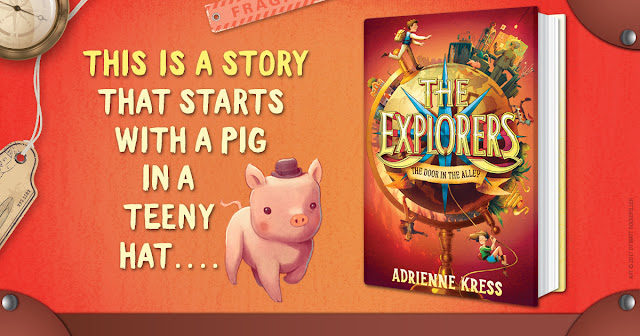 A few months ago a publicist from Penguin Random House contacted the Operation Awesome team, inviting us to participate in a blog tour for The Explorers: The Door in the Alley. He also offered an ARC of the book, and while OA typically doesn't do book reviews, my son is a middle grade reader, and I couldn't pass up the chance to do something cool with him.

He was very excited when I told him we had an advanced copy of the book and got to read it before anyone else did. However, the art inside the book wasn't filled in for the ARC, and that disappointed him! I might have to buy him a finished copy for his birthday later this month...

My son is 7 years old, and just finished second grade. He is a pretty average reader for his age and grade level. I flipped through the book, and felt that the vocabulary was a little too advanced for him, so I read it to him. We did a couple of chapters every night, which was fun for both of us.

Hardly anything happens in the first chapter, and as a writer, that bugged me. The whole first chapter is carried by a strong narrative voice, similar to that of A Series of Unfortunate Events, but perhaps even more twee. When we finished the first chapter, I looked up at my son.
"What do you think so far?" I asked, afraid that he might be bored.
"I like it!" He nodded his head with enthusiasm and poked my leg with his foot. "Can we read one more chapter?"

And because this is a book written for children, not adults, I deferred to the child. Luckily for my sanity, the voice toned down a lot as the book went on, which I felt was a good thing. The action spoke for itself.

My son loved the bad guys, both of whom have unique physical features. He was captivated by the action sequences, and liked both the male and female main characters. One part in particular made him laugh out loud, and then he made me stop reading so he could reenact that part for his five-year-old brother. He did not like that the book ended on a cliffhanger, though. I have a feeling he'll be asking me when the next book comes out many times over the summer.

Both of us would recommend this book to any middle grade reader, especially if they like action and adventure more than high fantasy.

Email ThisBlogThis!Share to TwitterShare to FacebookShare to Pinterest
Labels: Book Review, Kara, middle grade, the door in the alley, the explorers