#BookReview of Yes, No, Maybe So by Becky Albertalli & Aisha Said #atozchallenge 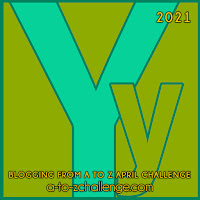 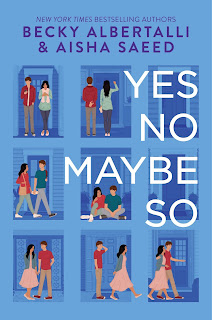 Set during a local election campaign, this is a cross-race, cross-religious romance with a strong political message.  Jamie is a shy, socially anxious guy who struggles to speak to strangers.  Forget about speaking in public.  So he's perfectly happy to be behind the scenes for his state senator's election campaign, stuffing envelopes, fetching coffee or whatever.  But everything changes when he's paired up with Maya to go canvassing door to door.

Maya isn't having a great summer.  Her parents are separating and her best friend is so busy working and preparing to go to college she seems to have forgotten she even has a best friend. Maya's mother suggests getting involved with the campaign might give her days some purpose and Maya grudgingly agrees even if it does mean hanging out with a childhood friend she hasn't seen in years.

As Jamie and Maya get more deeply involved in the campaign and what it means to them and the people around them, they realize that they have more in common than they might have thought.  The more time they spend together, the more they enjoy each other's company.  But no romance runs smoothly and things get more complicated when one person is Jewish American and the other is from an Indian Muslim background.

I enjoyed this book.  It was light and fun and Jamie was so adorably inept.  Yet under all the frothy romance there was some strong messaging about hate speech, politics and speaking up for what you believe in.  There was also some messaging around the power of social media to invoke change (and, as usual, create chaos for our happy couple).

I believe strongly that everyone who has the right to vote, should vote.  People have no right to complain about the political situation they're in if they didn't use their right to vote, even if their candidate didn't win.  Yet I felt this message was pushed a little too hard through this book.  The political campaign wasn't just the background for the romance at the forefront of the book, it felt like the reason for the book.  Like the authors were really, really intent on getting their political message across, at any cost.

Now I'm all for messages in books and for books to teach readers things, but I hate it when I feel like an author is bashing me over the head with their ideology.  Even if I'm on the same page as them.  So I didn't love this book as much as I wanted to.

But don't just listen to me.  Here's the blurb:

New York Times bestselling authors Becky Albertalli and Aisha Saeed have crafted a resonant, funny, and memorable story about the power of love and resistance.

YES
Jamie Goldberg is cool with volunteering for his local state senate candidate—as long as he’s behind the scenes. When it comes to speaking to strangers (or, let’s face it, speaking at allto almost anyone), Jamie’s a choke artist. There’s no way he’d ever knock on doors to ask people for their votes…until he meets Maya.

NO
Maya Rehman’s having the worst Ramadan ever. Her best friend is too busy to hang out, her summer trip is canceled, and now her parents are separating. Why her mother thinks the solution to her problems is political canvassing—with some awkward dude she hardly knows—is beyond her.

MAYBE SO
Going door to door isn’t exactly glamorous, but maybe it’s not the worst thing in the world. After all, the polls are getting closer—and so are Maya and Jamie. Mastering local activism is one thing. Navigating the cross-cultural romance of the century is another thing entirely.