First off, a HUGE thanks to everyone who joined our Awesome Query Chat with Elana Johnson last night! Hope you learned a ton about queries!


Oh, and I apologize for that random guest who started talking about Alexander Skarsgaard... I have NO IDEA who she is... at all...


Anyway! I am beyond excited to welcome author Janice Hardy to the OA blog!! Woot!
As part of her blog tour for the second book in her HEALING WARS trilogy, a.k.a. BLUE FIRE, Janice is here to talk about fantasy. And more importantly, why the genre is so awesome.
Take it away, Janice!
What Makes Fantasy Awesome. At Least to Me.
I’ve loved fantasy for as long as I can remember. Books, movies, TV shows, games – anything with a fantasy element got my attention. So it was only natural that when I started writing, it was fantasy. Here are my Top Ten Reasons Why Fantasy is Awesome.
1. Magic
Even as an adult I wished I could develop magic powers and be able to do all those cool things the heroes I read about could do. And being able to make up my own magic for my own books makes it doubly fun.
2. Dragons
Granted, not every fantasy book has dragons, but fantasy gave us dragons and I’ve wanted one ever since I got my Fisher Price pink dragon in the castle play set when I was six. I think my love of all things lizard came from my love of dragons.
3. Delicious Villains
Maybe there’s a touch of villain in me, but I love the bad guys, and fantasy has some great bad guys. Monsters, creatures, evil wizards, demons and devils. If you want to be bad, there’s something dark and nasty that is only too happy to help you do it.
4. High Stakes
Nothing in fantasy is ever halfway. If there’s a damsel to be saved, it’s from death. A town in trouble? It’s save it before it’s wiped from the map. And the world is almost always in jeopardy.
5. Funny Sidekicks
With all the drama from so much impending doom, you have to have a little humor to lighten the mood. No fantasy hero worth her stilettos (boots or knives, your pick) goes out without that friend or confidant who always has the best lines when everything is falling apart.
6. Other Worlds
Real life can get boring, but the characters in my fantasy worlds always have something going on. (Usually the end of the world) If by some freak of nature the world isn’t ending, then someone’s personal life is falling apart in an interesting way. Usually involving a pact with something nasty.
7. Pacts With Something Nasty
There’s a lot of fun to be had watching a hero make a deal you know is going to come back and get them in a heap of trouble. Bad guys making pacts is also fun, but not the same because you know they’ll get what’s coming to them. But the hero? Who knows what they’ll do to get out of things.
8. Girls With Weapons
I love tough girls who can handle even the meanest monster on their own, and fantasy is chocked full of them. (monsters and tough girls) Even when they start out helpless wallflowers, by the last page they’ve found their inner Xena and are out there kicking butt with the boys. Or kicking boy’s butts. Both work.
9. Talking Animals
I’ve wished all my life I could know what my pets were thinking, and to have my very own talking cat? That would be beyond awesome.
10. Anything is Possible
The mundane need not apply. If you can dream it, it can happen. That allows storytellers to craft so many amazing tales that cover everything from a silly romp to a serious social issue. There’s so much versatility in fantasy, both in the stories it tells or the worlds they’re set in.
Fantasy offers dreams and wonder, and who doesn’t need a little wonder in their life?
A huge thanks to Janice for sharing her awesome today! Here's more info about her MG fantasy book, BLUE FIRE (which you should totally pick up after reading, THE SHIFTER!!):
Blue Fire Blurb 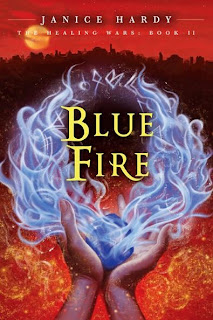 Part fugitive, part hero, fifteen-year-old Nya is barely staying ahead of the Duke of Baseer’s trackers. Wanted for a crime she didn’t mean to commit, she risks capture to protect every Taker she can find, determined to prevent the Duke from using them in his fiendish experiments. But resolve isn’t enough to protect any of them, and Nya soon realizes that the only way to keep them all out of the Duke’s clutches is to flee Geveg. Unfortunately, the Duke’s best tracker has other ideas.
Nya finds herself trapped in the last place she ever wanted to be, forced to trust the last people she ever thought she could. More is at stake than just the people of Geveg, and the closer she gets to uncovering the Duke’s plan, the more she discovers how critical she is to his victory. To save Geveg, she just might have to save Baseer—if she doesn’t destroy it first.
Link to Blue Fire Online Retailer
http://search.barnesandnoble.com/books/product.aspx?r=1&isbn=9780061747410&if=N&cm_mmc=Janice%20Hardy-_-k307877-_-j12871747k307877-_-Primary
Janice Hardy Bio 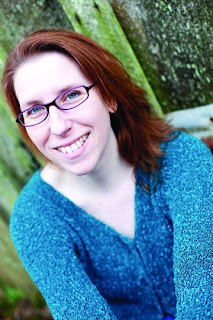 A long-time fantasy reader, Janice Hardy always wondered about the darker side of healing. For her fantasy trilogy THE HEALING WARS, she tapped into her own dark side to create a world where healing was dangerous, and those with the best intentions often made the worst choices. Her books include THE SHIFTER, and BLUE FIRE from Balzer+Bray/Harper Collins.  She lives in Georgia with her husband, three cats and one very nervous freshwater eel.
Website:
www.janicehardy.com
The Other Side of the Story Blog
http://storyflip.blogspot.com/
Posted by Amparo Ortiz at 6:14 AM