Writing Tip: Be The Cheater

Don't forget to enter OA's latest contest for a chance to win special edition Twilight books! Trust me. Those suckers are g-o-r-g-e-o-u-s.

Okay. Now for my writing tip.
I know I say this on my personal blog a lot, but I'm a huge TV fan. Obsessed, some would say (don't listen to them...). I like to think I've learned a ton about writing through the screen. And today I'm going to give you an example.
Ladies and gents, I give you The Boreanaz: 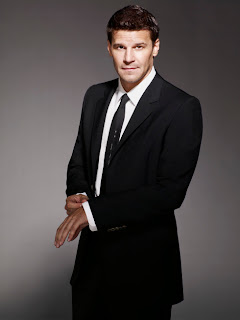 That, my friends, is actor David Boreanaz. He starred in Buffy the Vampire Slayer, and is currently on Fox's hit, Bones. His character on the Fox show is an FBI agent who was once a Marine. He is related to John Wilkes Booth (not a great reputation...), and is the father of an adorable boy who asks a lot of questions.
In real life, David Boreanaz is a cheater.
Yep. He cheated on his wife. Multiple times. And I stopped liking him.
Until I sat down to watch an episode of Bones, like I do every Thursday at 8pm. The man on screen wasn't David Boreanaz, folks. He was Agent Booth, the ex Marine who falls for a forensic anthropologist and keeps quiet about it. The man who has a ton of insecurities, but hides them with a smile. The man who fights the bad guys every day and doesn't wince when a gun is pointed at him.
Suddenly, it dawned on me. I love Agent Booth.
But I hate The Boreanaz.
That's why this week I'm telling you to be The Boreanaz--be the cheater. Whether you're writing in first person or third, you must get into your character's mind. You are not you when you're writing. You are someone else. You leave you at the door and get to work.
You need to make your readers believe that someone else is real (in The Boreanaz's case, he needs his viewers to forget about the cheating scandal and focus on Agent Booth, who would never cheat. Not even on a Calculus quiz). How do you do that? Think about how that someone else would feel if X or Y happened to him/her. How does he/she see the world? What's their biggest fear? Do they want justice? World peace? To slap Lindsay Lohan?
This process, what I like to call channeling your character's voice, is tough. But it can be done. Maybe not on the first try, or the second, or third. But someday, you'll get it right... just like The Boreanaz.
Now tell me: what do you do when your characters aren't speaking to you?
Posted by Amparo Ortiz at 7:39 AM