I've always been a pantser, but there's one story I've been working on for a few years but haven't been able to make much progress on because I couldn't figure out how it would end or even a glimmer of how it might end.

So about a year ago I made a goal to plot this story, the whole thing, and prove to myself that I could do it. I've read a ton of books on plotting and tried several different methods, including outlining, writing notes, and building spreadsheets. They've all inched me closer to my goal, but I could never get it organized in a way that really moved me forward.

Finally, I went out and bought a bunch of Post-it notes and took the notes I had written down already and put them all on my whiteboard so I could see them as a whole. This method has worked in the past for major revisions and rearranging, so logically, I should've tried it earlier for plotting, but, yeah, I'm a little slow sometimes. ;)

I started layering ideas under the main notes and eventually ended up with this: 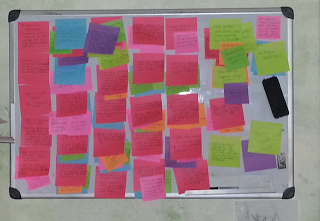 And somehow, in the middle of the absolute busiest week of the year for me, I managed to map out the last two-thirds of this story in one night, after almost three years spent plotting the first third (which was mostly done panster-style by writing scenes). I know a lot of things will probably change between now and when the first draft is finished, but now I have something to work toward.

And I'm pretty proud of myself for plotting a whole story before drafting it. :)

What about you? Are you a plotter or a pantser or some combination of the two? Any methods you can't live without?
Posted by Abby Annis at 3:10 PM