All We Left Behind by Nancy Herman

Way back before I joined Operation Awesome as an operative, I hounded my critique partners to enter this new Mystery Agent Contest I'd heard about. And one of those entries was OA's first ever success story!

The book which Nancy Herman pitched her middle grade historical novel as:

When 13-year-old Virginia Reed's powerful and arrogant father makes poor decisions that leave the Donner Party trapped in winter snows, she must find the courage to defy him in order to save the rest of her family.

is now titled All We Left Behind, and we have the honor of doing her cover reveal here on OA! 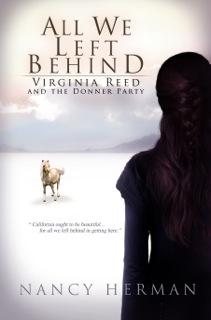 It is 1846, and thirteen-year-old Virginia Reed is pioneering two-thousand miles from Illinois to California with her parents, younger sister and brother, and the Donner family. She’s proud to ride ahead of the wagon train each day beside her beloved father, James.

But enthusiasm turns to alarm when her father and other party leaders make decisions that put the families dangerously behind schedule. Provisions dwindle. Hardships mount. Anger erupts. In a frantic effort to reach California before winter, the Donner Party takes an untried shortcut, with heartbreaking results.

Virginia painfully realizes the fallibility of the adults in her life and begins to rely on her own judgment. When the party becomes trapped in the Sierra by early snows, she must find the courage to defy her father in order to save the rest of her family.

Nancy also has a fabulous website, where she retraces the steps of Virginia and her family. She says, "Following Virginia’s physical journey helped me to understand the parallel emotional journey that ultimately transformed her from an obedient daughter to an independent young woman--determined to make her own decisions, whatever the consequences.”

Click on the cover above to go to the book's page on Goodreads (and add it to your Want to Read shelf!) and look for All We Left Behind to be released on October 30, 2013! Congratulations on the upcoming publication, Nancy, from all of us at Operation Awesome!

Posted by Angelica R. Jackson at 5:00 AM