1- Have you been to Paris and, if so, what was the best part of the trip?

Yes! I went to Paris when I was 15, with my French Immersion program in school. It was incredible, and it helped inspire MAYBE IN PARIS. The Louvre was a highlight, but one of my favourite places that I saw was Mont St Michel. It’s a monastery and Medieval town on top of an island, which is in the middle of a bay on the coast of Normandy. I want to go back to France so bad. If only I had unlimited cash!

2- What is the best meal you've had while traveling?

The best foods I had in France were pear gelato, tarte au chocolat, and the one I still daydream about, pistachio crême brûlée. My mouth is watering just remembering!

I wrote my first novel when I was 13, and wrote many of them throughout high school. I wrote them all on looseleaf paper taken from my school binders, because that way I could write in class. So my books ended up being these huge stacks of battered looseleaf, full of my cramped handwriting. In our school, we had a twenty minute silent reading period at the beginning of the second class of the day. My friends would take turns borrowing my manuscripts and reading them during this reading period, and eventually more and more people started noticing and asking me if they could read my books. It got to the point where girls in older grades were coming up to me at lunch and saying they “NEEDED” my books because their friends were sobbing over the fates of certain characters! It was such a strange experience, but it basically explains why I write — to make people feel things, to give people a meaningful experience — and shows what a strange, awkward goof I was… and still am.

I started writing as soon as I could read and write, and I was definitely helped along by the adults in my life, all of whom loved reading. In particular, two of my uncles — who were actually my dad’s best friends — gave me picture books for every birthday and Christmas. They made some stellar picks, because I still have all of the books they gave me, and they’re some of my very favourite books. This is why I’m such a huge fan of giving kids books as gifts. They can literally change their lives.

5- Who made the "Maybe in Paris" book necklace, and are more of them for sale somewhere?

I’m so glad you asked this! I got it from this Etsy shop called Jewelry by Compliment, run by a fabulous artist named Bistra Kanalieva. She’ll make a book necklace out of any book cover you want. I love my MAYBE IN PARIS necklace so much, it’s so beautifully made. Here’s a link to the piece on Bistra’s shop: https://www.etsy.com/ca/listing/266922464/custom-book-jewelry-custom-book-necklace

6- Would you share a picture with us of your favorite nail art? 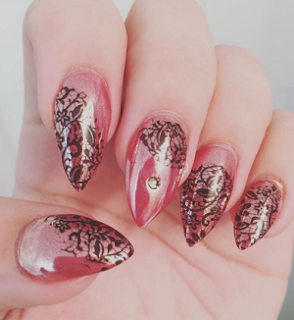 These are a recent favourite! It’s a chrome powder over bright pink, with black lace stamping overtop.

For short term, I’m working on a manuscript right now that I’m trying to finish in the next few months. I’m almost through a second draft now and it’s looking great. For long term goals, it looks like my next project might be a series! That’s new for me. I’ve got it mostly mapped out, but it’ll be a huge challenge.

8- Do you know anyone who is autistic, and did that help in writing the Levi character?

Yes! My younger brother is on the autism spectrum. He is also mentally ill. He’s the main inspiration for Levi in MAYBE IN PARIS. We never went to Paris together, but many of the other things in the book really happened.

9- Who is currently your biggest fan? What does that person love most (or "ship") about your debut novel?

Oh my gosh, I don’t know! Not all that many people have read MAYBE IN PARIS yet, aside from my best friend, my agent, and my editor. Something that both my agent and editor said before offering representation and a book deal respectively was that they loved how the book focused on the sibling relationship, and that the romance took a back seat.

10- What's your favorite One Direction song?

Ahhh, I have too many to list! “Best Song Ever” is a classic, but I’m going to pick an obscure one and say “Wolves.” It’s from their most recent album, and it’s a crime that it isn’t a single!

I love them all so much — I call them my sons — but at heart I’m a Harry girl.

I hope it makes readers laugh, because while the main subject is very serious, there’s a lot of levity. I also hope it helps readers appreciate their loved ones a little more. If it inspired at least one sister to give her brother a hug, I’ll be very happy!

13- What most helped you to improve your writing craft?

NaNoWriMo helps me with productivity a lot. I love the excitement of NaNo, and feeling pumped enough to pound out a whole first draft in a month is just incredible. Almost all of my books are born during NaNo.

In MAYBE IN PARIS, I think Levi is the most physically distinct character. He’s very big and tall, with huge feet and messy, tangled brown hair. His glasses are always crooked and smudged, and he’s always glaring or rolling his eyes at something Keira says.

Unfortunately not many, but like me, Keira does suffer from anxiety. The romance is interracial — the love interest, Gable, is black.

I’m a sucker for any YA with LGBTQIA+ themes. MAYBE IN PARIS is actually the only book I’ve written that doesn’t have those themes! I also love dark YA that has anything to do with serial killers, missing persons, or threatening cults and religions. All of those things are insta-buys for me.

Oh wow, I haven’t really thought about it. While it would be great to get starred trade reviews and awards, I think the things that will be most meaningful to me are reader emails or positive reviews from teens. Considering I already tear up when near strangers tell me they’re excited for the book, I’ll probably be an emotional wreck any time I get positive feedback!

I’ve always wanted to be traditionally published. I just don’t have the energy to be a successful self-pubbed author. I’m with Sky Pony Press, which is a pretty small press, and my agent and I went with them because they loved the book for what it was — a sibling story. I got feedback from some larger publishers that they would like the romance brought to the forefront, and that just wasn’t right for the book. You have to do what’s right for the book. I’m so glad I did.

20- What is one question (or discussion topic) which you would like the readers of this interview to answer or remark on in the comments?

I’d like to know what books everyone is looking forward to this year! There are so many amazing books coming out this year and I’m sure readers would love to gush about their favourites. 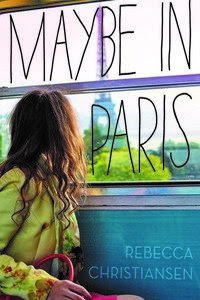 Here’s the summary for MAYBE IN PARIS, which comes out June 20th 2017:

Keira Braidwood lands in Paris with her autistic brother, Levi, and high hopes. Levi has just survived a suicide attempt and months in the psych ward—he’s ready for a dose of the wider world. Unlike their helicopter mom and the doctors who hover over Levi, Keira doesn’t think Levi’s certifiable. He’s just . . . quirky. Always has been.
Those quirks quickly begin to spoil the trip. Keira wants to traipse all over Europe; Levi barely wants to leave their grubby hotel room. She wants to dine on the world’s cuisine; he only wants fast food. Levi is one giant temper tantrum, and Keira’s ready to pull out her own hair.
She finally finds the adventure she craves in Gable, a hot Scottish bass player, but while Keira flirts in the Paris Catacombs, Levi’s mental health breaks. He disappears from their hotel room and Keira realizes, too late, that her brother is sicker than she was willing to believe. To bring him home safe, Keira must tear down the wall that Levi’s sickness and her own guilt have built between them. 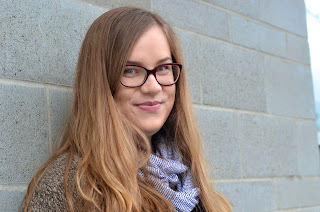 And here’s my bio:

Rebecca Christiansen tried to study creative writing at university, but kept skipping classes to write YA novels in the library, so she decided to pursue that instead. She loves boy bands and diet soda and suffers from incurable wanderlust. Rebecca lives with her boyfriend in a house packed full of books in Vancouver, British Columbia, Canada.
I can be reached on Twitter @rchristiansenya and Instagram or on Tumblr (http://rebeccachristiansenauthor.tumblr.com )!