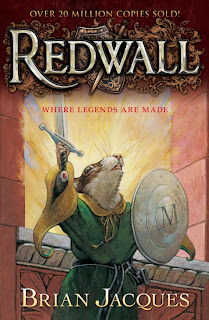 It was one of the first things I learned when I started studying how to get started in the children's book industry—No talking animals. No problem there. I have files and files of ideas, and none of them involve talking animals.

I still see "No talking animals please" in the wish-lists and guidelines of agents and editors. But recently I was talking with a very enthusiastic fourth grade teacher who was planning on participating in National Novel Writing Month. He wanted to write a middle grade novel, so he brainstormed ideas and decided to let the kids pick.

For a moment I wondered if I should warn him, but then I thought of my own bookshelves, the books beloved by my children, and by me. The Redwall series, The Mistmantle Chronicles, Babe the Gallant Pig, The Autobiography of a Self-Educated Hamster, The Tale of Despereaux, The Ralph S. Mouse books, Charlotte's Web.

So why no talking animal books? Are they harder to do well? Are they more likely to be written by people who haven't studied the business and honed their craft? Is this one of those areas where grown-up tastes just don't match up with kids' preferences?

I didn't tell that teacher he might have trouble finding a home for a talking animal story. I'll bet he grows a lot as a writer trying NaNoWriMo for the first time, and who knows—he just might churn out some irresistible furry heroes and fang-bearing villains. Whatever happens to his book, I'll bet his class loves it.