Not to be confused with a Terrible Ending.

A Terrible Ending is one which makes you put a book down and feel like you just wasted hours of your life.

Least Satisfying Endings are in another class. They come at the end of an epic, moving book that raised your expectations and just. didn't. quite. deliver. 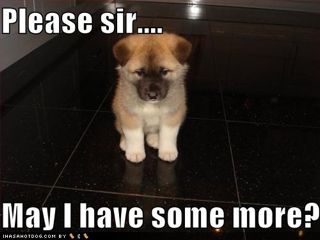 Without naming names, I want to talk about such an ending. I read what I originally thought was a trilogy. The first two books left me feeling unsatisfied with the two main characters and their relationship left hanging in the air. Then FINALLY at the end of Book 3, there was the catharsis I was seeking. Angels sang hallelujah. It was a beautiful thing. I think I actually let out a happy sigh.

Then came a fourth book. I put off reading it for a long time because the reviews all said the same thing: this book shatters the feel-good you got at the end of the trilogy. Some of the reviews even suggested never reading Book 4.

I knew I'd pick it up eventually out of curiosity and a love for the characters, but I am glad I gave myself time to enjoy the bliss of a happy ending wherein most loose ends were tied up and every character had grown in unique ways. After investing over a thousand pages into these characters, I needed that rest. But after a long rest, it was time to find out what happened next.

I finished Book 4 last night and now I know what the reviewers were talking about.

The author pulls the rug out.

You think you're about to get another nice resolution with most loose ends tied up, and then...

It reminds me of a story my mom told me about The Lord of the Rings trilogy actually starting out as one long book. The publishers, she says, split the books somewhat arbitrarily into three installments. As a result, one book ends with the characters in fatal peril and emotional turmoil... which means that the reader is also left in emotional turmoil.

Books are hard to write. I'm still trying to figure out the ideal story arc for my own beloved character creations. Endings are probably the hardest. As a writer, I totally sympathize with authors on this. But as a reader, it's just hard not to be disappointed.

So for the sake of learning the craft from published works, I'll start a list of Ways Never to End Your Book (my opinions, of course). Please join me in the comments.

What kind of endings drive you nuts as a reader?