On Batman And Letting Go 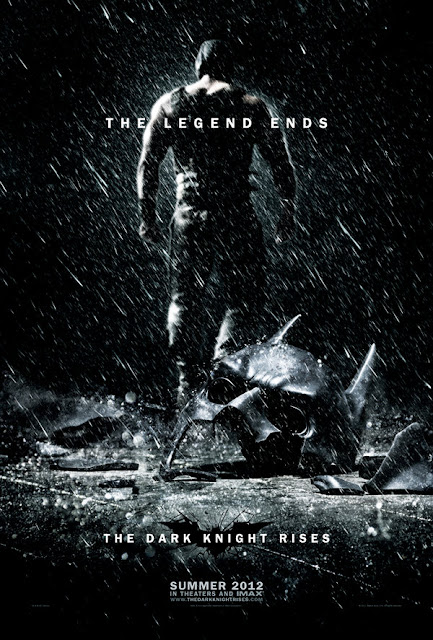 But back to that poster. You see how the words "The Legend Ends" sit at the top? Yep. Those did me in, folks. I read the stupid words and bawled.

Well, I'm a h-u-g-e Batman fan. Christopher Nolan, director/screenwriter extraordinaire, has re-envisioned my childhood superhero into someone I don't want to say goodbye to. Of course, I'm aware that even after Nolan's trilogy wraps up, more Batman films will be greenlit in the future.

But Nolan won't direct or write them.

Christian Bale won't be Batman anymore, either. Some new dude will take over and re-envision the man/mythology all over again.

That's one reason I don't want to let go.

The other? I suck at letting go of my favorite characters. Big time. I can convince myself that it's for the greater good and that it's not a real person I'm saying goodbye to, but in the end, those pesky tears always come back. Something tells me I'm never going to change. I'm destined to be a sort of character hoarder, unwilling to part ways with the fake people ruling my heart, and eventually burying myself underneath their awesomeness.

Which leads me to today's questions: how do you let go of your favorite characters? Which character proved the hardest to let go of for you? They can be from books/movies/TV shows you love, or they can be from your very own WIPs!!!

Also, for the Batman lovers out there, here's the latest trailer for The Dark Knight Rises: *sobs*

Oh my. In my current WIP I cried for days about letting go of a certain character. DAYS. And because of that, I've vowed to write another book about him because I have to make things right for him--even though he isn't real. How lame is that?

Rudy in The Book Thief by Markus Zusak. Even though I knew it was coming, it was still a major tear-jerker!

Based on this trailer, I'm not sure I can hack the movie! Yipes.

I hear ya. For some reason this doesn't bother me with movies, but it does with TV. I just raced through the Syfy channel series Stargate: Universe on Netflix, a series I never considered watching until a friend suggested it, and since it ended after only 2 seasons I feel bummed I won't get to see what else happens with the characters. Maybe b/c TV is so serialized, and when a series ends early, those loose ends aren't all tied up.

No. I can't let go of favourite characters. It's worse in books, when a series ends and I wanna know more. But if the characters are mine, then it's not so bad cause I've a little more control over their fates.
I have killed one character I liked though, and I do plan to kill again. Thing is, with these two it's trying to work out how it won't be such a cop-out cause the land's in such an upheaval that, with divine help, at least one can come back. And the other ... well they're taken care of in another fashion.

If it entertains you, you should look up "Holy Musical B@tman" on youtube. It's an entire play/musical about Batman and it's hilarious! :)

I sometimes find it hard to let go of characters in books I've read as well. I often take a resprite between reading, just because I don't want to "wash" the previous characters away yet.