Last week Kristal recently wrote a brave, honest post last week about a rejection while many of her writing cohort has gone on to publication, and it got me thinking about Naomi Watts. Yep, the Australian actress best known for remakes of The Ring and King Kong. 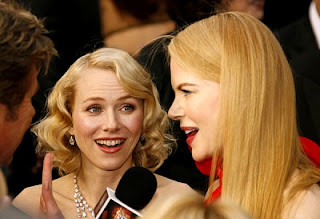 Actually, Kristal's post made me think about something I thought about Naomi Watts a long time ago. (It's funny how random thoughts come back years later. Is this a writer thing?)

When Watts had her big break in Mulholland Drive in 2001, the media made a huge fuss over the fact that she was Nicole Kidman's best friend. And my thought was, why didn't Kidman give her best friend a hand in the 10 or 12 years that she was a big star?

I know a lot of writers at all stages of their career -- from newbies starting out to multiple NYT best sellers. That includes old friends from high school and college, co-workers from the day job, and friends I've made through writing networks, including online.

And I know now what friends can and can't do. Writer friends CAN read, critique, support, and offer leads and referrals. They can help me be a better writer and be happier while I do it.

What they CAN'T do is offer contracts or representation. But if I'm a better writer, I hope to get contracts on the merits of my own books.

Sometimes it seems like groups of writers must give each other all kinds of big breaks, but it's more like Naomi and Nicole. They are friends because they share interests. They are successful because they are good. Naomi was working for those all those years that Nicole was a star, and eventually she hit it big. She earned her own way. Now another decade has passed, and they both have matured in their lives and careers -- the way old friends do.


That's better. I want to earn my way. I'm trying to pay it forward to other writer friends as I go, and I'll keep doing it once I get to the next level. I just hope it doesn't take 10 or 12 more years.

Great post and so true. Friends are there to help us but we want to be the ones who deserve it :)

awesome post! And totally true. Connections can help, sure. But they can only take you so far. Your hard work and talent is what will really get you where you want to go :)

Good analogy - and conclusion. About 10 years ago an area family with the last name of Watts named their baby daughter Naomi and I've always wondered if they had ever heard of the actress!
erica

You'll get there for sure! No doubt! You have a far and wide reaching generosity, so basically a friend to many far and wide! : )