Cthulhu Ate My Mother, Or the Rise and Fall of Human-Flavored Nougat.

Warning: This post has nothing to do with eating, Cthulhu, mothers, nougat, or things rising and falling.
Second Warning: No Hobbits were harmed in the writing of this post...but, no worries, I will get around to it soon.
Final Warning: Now that I think about it, Cthulhu is mentioned once in passing, or four times in passing if you count the number of mentions in this title. But honestly, if you have enough time to sit around and count Cthulhu references (that's five), you should really just move on to the post or, even better, find something good to read. I hear Justin Bieber has a new book out. Over four and a half stars on Amazon. That's not bad.

People sometimes ask me, “Hey, Eric, how do you come up with such fantastic monsters?” I respond by saying, “Get off my porch, Creep.”

But getting off my porch is only the first step to creating fantastic monsters. I can’t remember the other steps, but I’m sure they’re not as important. Something about vampires, maybe?

The fact is, monsters can come from anywhere, and they frequently do. They hide in the backs of our cars and tease our necks with their salacious protuberances. They steal our souls, our blood, our children, our volition, and our minds.

They whisper from the shadows and drop from the stars. Our nightmares gave them flesh; our terror, the breath of life. They slithered from the primordial soup and screamed at the heavens when the earth was young.

The key to a great monster is not what it can do, but what it can’t. Monsters are defined by their insatiable needs, their incurable limitations, and their frightening “otherness” that might be us.

A dependence on blood. A fear of holiness. Uncontrollable change. Ugliness and love.

Monsters crave the forbidden and suffer in their denial or success. Our fear comes in knowing they might transcend their limits and satiate their desires. We are not enough to stop them. Or we are, and we shouldn’t because in their transcendence, they prove themselves more human than us.

The days of the faceless, fathomless monster are over. We’ve conquered the earth and made it our footstool. Darkness flees from us at three hundred meters per second. Learning has made us confident in our ignorance. We no longer fear the hungry creature rising from the swamp, or the mindless thing gibbering in the corner. We identify it, we name it, and we dismiss it as a known quantity. Crocodile. Dinosaur. Electricity.

The ancients called it Leviathan, but we know it was just a giant squid.

The nameless, unknowable things that fill our universe create dread not because they’re unknowable, but because in the end, we realize that we will know them.

Terror comes in understanding. What if the monster’s worse than us? What if it’s better? Scariest of all, what if it’s exactly the same?

Do we fear ourselves?

Some of the monsters become characters. Others I use as mirrors for my characters.

One of my favorite monsters in The Hunter Chronicles is the Jack—a giant pumpkin patch that stretches out for miles and is made of massive gourds, some of which are the size of houses. The Jack isn’t a character, but a mirror that reveals a character. 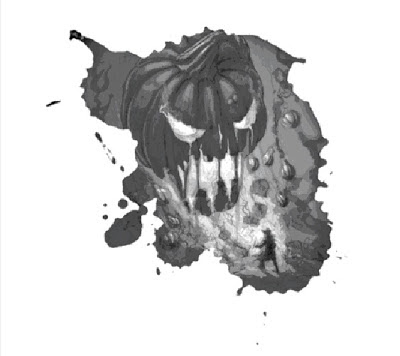 The small figure you see in the picture is Phineas T. Pimiscule, a Hunter of Legend who has protected my main character, 12-year-old Sky Weathers, his entire life. That’s exactly what he’s doing here. But what is Phineas afraid of? What does the Jack reveal about Phineas’s character? Here’s an excerpt of the battle between Phineas and the Jack from The Hunter Chronicles: Return to Exile (Book 1):

Gourds smashed at Phineas, batting him in the head, in the back. He fell to one knee, and then struggled back to his feet. One step. Another. More and more vines appeared, wrapping around him like tentacles, until it looked like he was dragging the entire patch, and the whole world with it.
More vines and more, pulling him backward, dragging him down. Tens. Hundreds. Thousands. Wrapping around him. His torso. His neck. His steps slowed . . . stopped. He stood, motionless, pressing against the weight and horror. Gourds pummeled him like fists, over and over, hitting him so hard they shattered from the impact. And still he stood, blood pouring from his side.

Phineas is facing the impossible—a hopeless struggle against a vast and uncaring force of nature—in order to buy Sky time to escape. Phineas isn’t afraid of death: he’s afraid of failing Sky. The Jack reveals that in the face of hopelessness, Phineas creates hope, no matter the cost.

So, to sum up, how do you create a fantastic monster?

First, get off my porch.

Second, do other stuff, maybe something with vampires.

Third, do whatever else I said. Honestly, if you’ve already forgotten, I can’t help you.

Oh, and buy lots of copies of my book The Hunter Chronicles: Return to Exile (Book 1). The Legend Thief (Book 2) comes out in March. It’s monstertastic. That’s a word. Look it up (in my book that you’ve bought).

Love this! I never really thought that "knowing" could be scarier than not knowing....but really, what's scarier? Being afraid something might be lurking in the darkness or KNOWING exactly what is waiting for you out there? *shudder*

LOL. You just sandwiched some of the most sage advice I've seen on villains/monsters in between a clever, MG-friendly voice. *worships at your feet* I love the bit about giving them limitations and then making the reader/hero fear they will overcome those limitations. It's like the junkyard dog on a chain who reaches the end of it, you sigh with relief, and then he breaks the chain. Brilliant.

Haha :) Very interesting post! "We don’t fear the monster; we fear what the monster reveals about ourselves." Neat quote.

Based on this, I think I got the villain right in my book! I originally had him sinister but mysterious, until I realized we needed some concrete examples of what he wants and what he's willing to do to get it. Creeped myself out while writing it, to the point of having nightmares!

I think you touched on something else here as well that monsters need: dimensionality. They should not just be faceless scary alligators, or whatever other creature happens to scare you. They should have their own goals and motivations!

If it helps create scarier things, then I will gladly get off your porch. I'll just lurk in the shadows next to it, shall I? Rustling leaves. Thumping against the side of the house at 2am.

Thanks for this post, it gave me something to mull over.