1. You are allowed to write a shitty first draft (courtesy of Anne Lamott)
2. Write drunk, edit sober (attributed to Hemingway)

Lest you think I'm advocating hackery and binge drinking in pursuit of the great American novel, let me explain.  To me, both of these quotes advocate the same thing – freeing yourself of the stress of your book being "perfect" while you write the first draft, and emphasizing that you can fix it in revisions.

This last part is key, in my opinion.  Fixing it in revisions.  It's where you make your novel shine, where you refine plot points and character relationships, where you learn something new about your book, something you didn't see the first time around. It's where your novel becomes your novel.
When you talk to writers, we pretty much fall into two camps: Team First Draft and Team Revisions.  Some writers love the process of drafting a book, of world building, of exploration…but hate the nuts and bolts process of edits. For others, the process of writing that first draft is about as appealing as having your skin flayed off, but once the words are finally assembled on the page, they delight in the challenge of making it all work.  Personally, I fall into the latter category, though if you ask me what I think of revisions when I'm in the thick of a multi-page editorial letter, I might give you quite a different answer.

But whether you look forward to edits or abhor them with the white hot passion of a thousand burning suns, you'd better get used to them stat.  My average novel goes through at least six major revisions before it is ferried off to copy edits: three from me, and three from my editor.  At least six.  Sometimes more.  Bottom line: writing isn't so much about writing, it's about revising.

Not gonna lie, though. As much as I enjoy the problem-solving endeavor that is revising a novel, the first time I opened an honest-to-God editorial letter from my editor, I freaked the hell out.  It was a seven page behemoth, employed the time-honored "shit sandwich" approach, i.e. an opening page of "I love this book! I love you! I love how you did X, Y and Z!" followed by six pages of everything that was wrong with my book, then tagged with a closing paragraph of "Don't freak out – I really do love it!"

As much as loved the two slices of Wonder Bread, the shit in the middle seemed insurmountable.  How was I going to interpret her notes?  How could I possibly organize and implement all of it?  Maybe I should just burn this novel and start a new one?

The first step I took was to put the letter down and walk away.  Not for a day or two, but for a week or two.  Every once in a while I'd look at it, read it through again, then put it away.  I didn't take notes, I didn't attack my manuscript, I just allowed my brain to internalize what my editor was asking, like tea seeping into hot water.

It's amazing how effective this for me.  Suddenly, after ten days or so, something clicks.  I call this the Tetris moment – when see that perfect piece coming down at mock speed, you rotate it and slip it into the perfect spot which sets off a chain reaction which clears every single row from the screen.  I know exactly what I need to do, how to make it all work.  I'm energized, elated, revving to get to work on revisions.

That's when the real nuts and bolts work part comes into play, mapping out what I need to do where – scenes to be added, characters to be expanded, focus to be pulled, subplots to be streamlined.  Every writer goes about this differently, everything from multi-colored sticky notes, to a corkboard and index cards, to pages of the manuscript printed out and tiled across the floor of their office.  For me, it all comes out in outline form, chronologically, and then I start crossing things off that outline as I implement them, but that might not work for everyone so I wouldn't dream about giving advice there.
However, the one thing I can say for sure is that you need to take that time between when you receive your revision notes and when you actually start to work on them.  Don't rush, let your brain absorb every detail of your notes, then let it do the heavy lifting for a few days while you go about your normal life.  Trust me, it'll help. 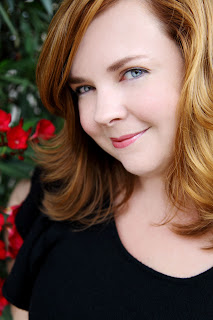 Gretchen McNeil is an opera singer, writer and clown. Her YA horror POSSESS about a teen exorcist debuted with Balzer + Bray for HarperCollins in 2011. Her follow up TEN – YA horror/suspense about ten teens trapped on a remote island with a serial killer – was released September 18, 2012, and her third novel 3:59 – sci fi doppelganger horror about two girls who are the same girl in parallel dimensions who decide to switch places – is scheduled for Fall 2013. Gretchen's new YA contemporary series Don't Get Mad (Revenge meets The Breakfast Club) about four very different girls who form a secret society where they get revenge on bullies and mean girls begins Fall 2014 with GET EVEN, followed by the sequel GET DIRTY in 2015, also with Balzer + Bray.

Gretchen is a former coloratura soprano, the voice of Mary on G4's Code Monkeys and she sings with the LA-based circus troupe Cirque Berzerk. Gretchen blogs with The Enchanted Inkpot and is a founding member of the vlog group the YARebels where she can be seen as "Monday." She is repped by Ginger Clark of Curtis Brown, Ltd. 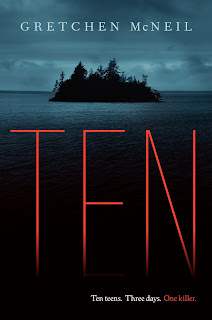 Amazon.co.uk
Indiebound
Barnes & Noble
Posted by Lindsay at 11:00 AM