Gennifer Albin: How I Revise

The awesome people at Operation Awesome (that's a purposeful repetition) asked me to stop by and give some tips about revising after NaNoWriMo.  I've done some posts and events where I've actually shown what my editing looks like (see here), so I thought today I would talk about my actual mechanics of revision, or how I physically edit my books.

I hard copy edit, which means I go all old school and lug around paper copies of my book.  I attempt to covert everyone to this method, because I believe seeing your words in a different medium helps.  In the past I would shoot a draft over to Officemax to print and bind it, but now I have a fancy laser printer (if you have the means, I highly recommend picking one up).  Perhaps it's from years of grading thousands of freshman comp essays, but I can work pretty fast with a red pen.  The first time my CP printed her manuscript, she called me excited because the book was out of her head.

It really helps to see it on paper.

If you don't want to murder a bunch of trees (don't worry, I recycle drafts I don't save), there are two other tricks I use that are compatible with going all electronic.  First, change the font of your manuscript from the one you wrote it in.  I do this for my hard copy, but it will work just as well on the computer.  It's really easy to get to a point where your mind shuts down while editing, but a small shift in font can help wake it up and force you to pay attention.

The second trick that if you have Word you can have your draft read to you through its text-to-speech function.  I've yet to do this, but I have it on good authority that the monotonous drone of a computer voice really helps you hear areas that need further editing.

So now you have some of my tricks for approaching the revision process.  My advice about the words and the sentences and the story?  Layer, revise, reread, repeat. 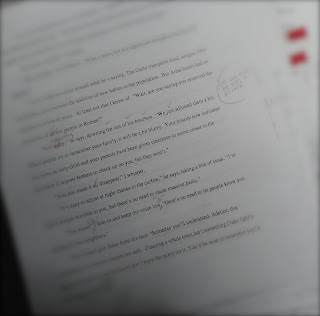 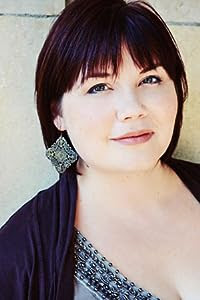 Gennifer Albin holds a Masters degree in English Literature from the University of Missouri. A recovering academic, she turned to writing her own books.  Gennifer can be found in coffee shops, dreaming up new worlds.  She lives in Kansas with her family.

Sixteen-year-old Adelice Lewys has always been special. When her parents discover her gift — the ability to weave the very fabric of reality— they train her to hide it. For good reason, they don’t want her to become a Spinster — one of the elite, beautiful, and deadly women who determine what people eat, where they live, how many children they have, and even when they die.
﻿​
Thrust into the opulent Western Coventry, Adelice will be tried, tested and tempted as she navigates the deadly politics at play behind its walls.  Now caught in a web of lies and forbidden romance, she must unravel the sinister truth behind her own unspeakable power.  Her world is hanging by a thread, and Adelice, alone, can decide to save it — or destroy it.﻿
​
Find CREWEL in the following stores: