First of all, I have to say thank you for letting me post on your blog! It is an honor.

Now, let's talk a little bit about characters. What makes a character likeable? Interesting? Despised? Here are a few thoughts.

These three things are very typically wrapped up in each other. Some of the best characters are not only plagued by difficult pasts, but it is that very past--that inner turmoil--that motivates them to do interesting and amazing things. Think Batman/Bruce Wayne. His parents were murdered in front of his face. Because of that traumatic event, he decides to grow up and fight bad guys. Not only does this motivate him to kick some butt, it also makes us feel something for him . . . compassion! And when you feel compassion for a character, it builds a bond with that character and something happens. You LIKE him. And if you like the character, you want to know what happens to him.

So, know your character's past, and know how that past motivates him.

Are you perfect? Is anyone perfect? Yes, actually we are all perfect in our uniqueness and personal quirks--and that's what makes us so special and loveable. This is also what makes a character special. BUT you can't tell us what her flaws are (ie: A door slammed and the power went out. She was nervous so she chewed her fingernails until they bled.). You have to show us her flaws (ie: A door slammed and the power went out. She caught her nail between her teeth and started chewing while she waited for her pulse to slow down.). Flaws/idiosyncrasies can be simple things, like only wearing white socks, or they can be deeper things like not trusting people or being scared of what's under the bed or carrying around a special handkerchief because it belonged to a long-dead grandma.

So, know what makes your character quirky. Know her flaws. Know her odd habits. And embrace them.

Last of all, and this was touched on already, because it is the most important thing you can know about a character: PAST PAST PAST!!!

To know someone's present personality, you have to know their past. You have to know why they act the way they do. Why they respond to situations the way they do. Why they love or hate a certain thing, why they're scared of certain things, why we should love them. So, get to know your character. Make up his/her past! What traumatic things happened to him in grade school? What were her parents like? What was the best day of his life? The worst? The saddest? The scariest? Know these things, and then while you're writing, you not only know what makes your character tick, you can also give us little tidbits of his/her past.

Most importantly, have fun with your characters. Make them unique and pitiful and funny, and then we won't be able to help ourselves. We will fall in love with them. 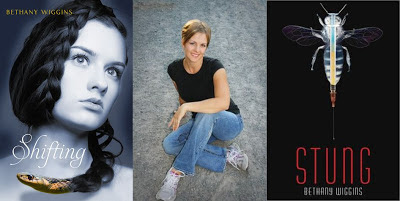 Bethany Wiggins has always been an avid reader, but not an avid writer. She failed ninth grade English because she read novels instead of doing her homework. In high school, she sat alone at lunch and read massive hardback fantasy novels (Tad Williams and Robert Jordan anyone?). It wasn't until the end of her senior year that the other students realized she was reading fiction--not the Bible. Several years later, Bethany's sister dared her to start writing an hour a day until she completed a novel. Bethany wrote a seven-hundred page fantasy novel that she wisely let no one read--but it taught her how to write. The rest is history.

You can find Bethany at:

Shifting - Amazon; B&N; Books a Million
Eighteen-year-old Magdalene is transferred to what should be her last foster home in Silver City, New Mexico. Fitting in has never been her strong suit, but it's not for the reasons most people would expect-it's because Magdalene is a shape shifter. But even in her new home danger lurks, waiting in the shadows to pounce. Those hunting her are the Skinwalkers of Navajo legend, who have traded their souls to become the animal whose skin they wear- and Maggie is their next target.

Full of romance, mysticism, and intrigue, this dark take on Navajo legend will haunt readers to the final page.

Stung (available for pre-order) - Amazon; B&N; Books a Million
Fiona doesn't remember going to sleep. But when she opens her eyes, she discovers her entire world has been altered-her house is abandoned and broken, and the entire neighborhood is barren and dead. Even stranger is the tattoo on her right wrist-a black oval with five marks on either side-that she doesn't remember getting but somehow knows she must cover at any cost. And she's right. When the honeybee population collapsed, a worldwide pandemic occurred and the government tried to bio-engineer a cure. Only the solution was deadlier than the original problem-the vaccination turned people into ferocious, deadly beasts who were branded as a warning to un-vaccinated survivors. Key people needed to rebuild society are protected from disease and beasts inside a fortress-like wall. But Fiona has awakened branded, alone-and on the wrong side of the wall . . .
Posted by Michelle McLean at 1:00 PM

Great point about creating a backstory for a character and building their character traits off of that. I'm not much of an outliner, but I've worked on character profiles. I'm hoping my next story I'll have more character background before I start writing. Thanks for a great, motivating post!

Good point about focusing on the flaws and "weirdo" elements of our characters, that definitely makes them more real. Thanks!

I consider Bethany Wiggins an authority on this subject, having devoured her novel, SHIFTING. Holy sympathetic character, Batman. I wanted to hug her, then adopt her, then hug her again. I'm taking all this character development advice to heart.

Bookmarking this! Conscise and to point recommendations - thank you!