I’m so happy to be guest blogging at Operation Awesome today. The lovely writers here asked me what it was like writing about a culture different from my own, and if it caused any difficulties with my revisions.

As the author of the KATANA series (about a girl who gets possessed by a fifteenth century samurai) I knew that, despite my book being “fantasy” I needed to do my homework. The biggest setback for me was money. I knew the best way to learn about the samurai was to actually travel to Japan. But after looking into the cost of a trip to Japan, I promptly put my eyeballs back into my sockets and realized I was going to have to go about my research in another way.

So I went to the library and checked out a mountain of books ranging from the history of samurai to tourism in Japan, read through all of them, and filled up three spiral notebooks with just notes. Then I watched documentary after documentary, and interviewed anyone I could find who’d been to or lived in Japan. I found a wealth of world travelers by interviewing military members. And local martial artists were more than happy to answer my questions on weapons and fighting styles.

I spent six months on research alone before I ever put pen to paper. So you’d think I’d be pretty historically accurate, right? Wrong.

Unfortunately, you can do all the research in the world, and you still won’t get everything right. You could interview an “expert” who might not have their facts straight. You could read a book or article based solely on a theory. The sad fact of the matter is that time warps history. Without a time machine, it’s impossible to know exactly how thing were—especially the farther along you go. It’s like the saying goes, the only thing two historians can agree on is how wrong the third one is.

If you write about a culture different than your own, especially in a time period different than your own, you will get critics who will blast loudly just how wrong and inaccurate you are. I once had a historical romance author tell me about the hate mail she received from a reader because a character in her book used a type of drinking glass that wasn’t historically accurate.

Now does all this mean you shouldn’t take a chance by writing about another culture/time period? Depends. If you want to write a historical, you’re setting your reader up for certain expectations and you’re going to have to do a lot of research to make sure you don’t disappoint. But if you’re writing a fantasy and you make it clear to the reader that it’s a fantasy, you have a little more wiggle room to bend the facts. (Spoiler alert: Abraham Lincoln was not really a vampire slayer.)

In the end, it comes down to writing what you love. Personally, I’ve always been fascinated by martial arts and always felt samurai were the fiercest warriors who ever lived. And I wanted to share my love and fascination with the world. And with reviews like:

"This action-packed novel has a unique and compelling plot...Fans of Carrie Asai's Samurai Girl series will be particularly interested, but even readers who dislike supernatural story lines will enjoy this tale of modern samurais." - School Library Journal

I think I may have done just that. 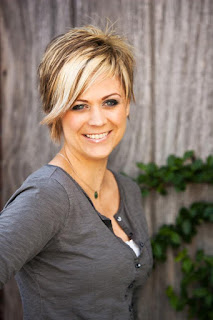 When Cole Gibsen isn't writing books for young adults, she can be found rocking out with her band, sewing crazy costumes for the fun of it, picking off her nail polish, or drinking milk straight from the jug -- provided no one is looking.

You can find her at: 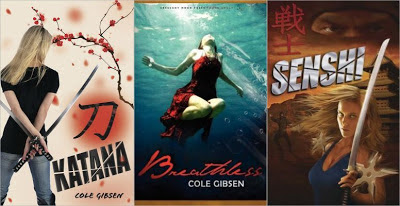 Katana: Amazon; B&N; Books a Million
Kill Bill meets Buffy in this supernatural samurai tale
Rileigh Martin would love to believe that adrenaline gave her the uncanny courage and strength to fend off three muggers. But it doesn't explain her dreams of fifteenth century Japan, the incredible fighting skills she suddenly possesses, or the strange voice giving her battle tips and danger warnings. While worrying that she's going crazy (always a reputation ruiner), Rileigh gets a visit from Kim, a handsome martial arts instructor, who tells Rileigh she's harboring the spirit of a five-hundred-year-old samurai warrior.
Relentlessly attacked by ninjas, Rileigh has no choice but to master the katana--a deadly Japanese sword that's also the key to her past. As the spirit grows stronger and her feelings for Kim intensify, Rileigh is torn between continuing as the girl she's always been and embracing the warrior inside her.

Breathless: Amazon; B&N; Books a Million
Obituary-reading emo girl Edith Small is broken - the end result of forcing herself inside a mold that doesn't fit. All she wants is to conform to her strict sergeant stepfather's rules long enough to make it to graduation day. But a boat accident threatens to unravel the life Edith has worked so hard to keep. After waking up in a hospital with a lacerated shoulder, Edith fakes amnesia. Because admitting she received her injuries from a blue-haired girl who breathes underwater is all the reason Sir needs to send Edith on the first bus to military school.
Safe at home, Edith struggles to put the nightmare behind her. But the mysterious creatures that live in the ocean aren't about to let her forget. After meeting Bastin - a strange boy with silver hair and black eyes - on a secluded dock, Edith learns about the war raging undersea to end human existence. A war that Edith, unwittingly, has become the key to winning.
In a world where death is an ever-present shadow and motives are as dark as the bottom of the ocean, Edith must decide if her life is worth risking for a love that can't survive past the shore.

Senshi (Katana 2, available for pre-order): Amazon; B&N; Books a Million
Rileigh must choose: will she save the world or save her soul mate?
Rileigh Martin, the reincarnation of samurai warrior Senshi, is doing her best to balance her samurai life with a normal teenage one. But it isn’t easy when ninjas attack her from the shadows and her growing, unpredictable ki powers cause chaos and dangerous accidents wherever she goes.
While Rileigh keeps catching glimpses of Whitley—who is supposed to be dead—around every corner, she learns that the reincarnated kunoichi (a powerful female ninja) wants to kill her and destroy the world. Son of hibachi!
And then Rileigh’s life hits ten on the suck-o-meter when Kim, her soul mate from her past life, is kidnapped by the ninjas. With time running out, she’s forced to make an impossible choice: save the world or save her true love.

Posted by Michelle McLean at 11:00 AM